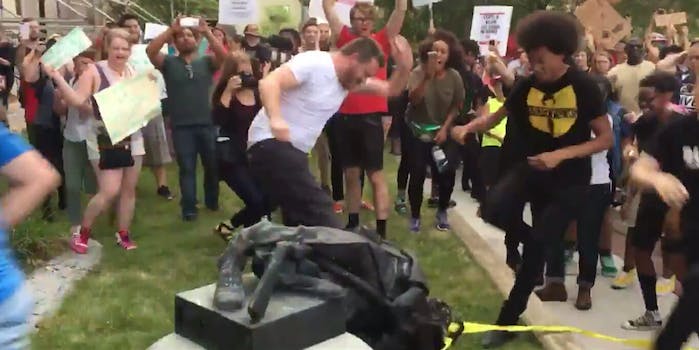 Demonstrators kicked and punched the statue after it fell to the ground.

The violent white supremacy rally in Charlottesville, Virginia, let much of the U.S. shaken over the weekend. But mere days after the riot, one group of protesters have quite literally taken justice into their own hands by bringing down a Confederate statue in North Carolina.

During a Monday night “emergency protest” outside the Old Durham County Courthouse, a woman reportedly hopped onto the Confederate Soldiers Monument, tied a rope around the neck of one of said soldiers, and let protesters tug on the rope. The statue soon crashed to the ground, causing protesters to scream in the excitement. And as the monument remained on the floor, demonstrators began kicking, punching, and gesturing at the fallen statue.

“No Trump, no KKK, no fascist USA!” protesters chanted as the statue began to fell. “The people united shall never be defeated” was also shouted during the protest, both chants highly common at anti-fascist and anti-Trump protests across the nation.

Gov. Roy Cooper (D) has since criticized the statue’s toppling, which is illegal under state law.

“The racism and deadly violence in Charlottesville is unacceptable but there is a better way to remove these monuments,” Cooper wrote on Twitter.

The white supremacist “Unite the Right” rally in Charlottesville on Saturday was prompted by the removal of a Confederate statue there. Earlier this year, when New Orleans announced removing four Confederate monuments across the city, protests erupted from white supremacists and Confederate sympathizers. Workers reportedly received death threats prior to the first statue’s removal, causing police to remain on guard to prevent acts of terrorism.