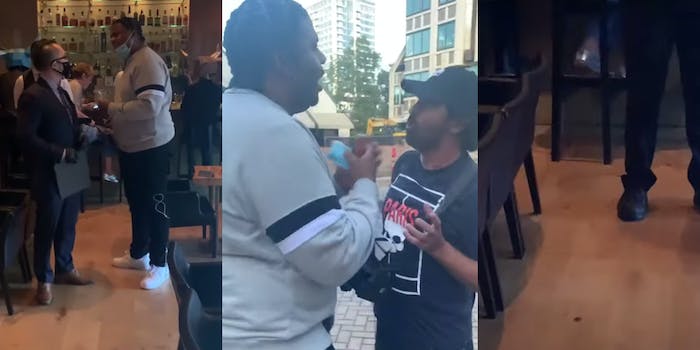 'This is pure racism, she has on Adidas.'

Umi Sushi, an establishment in Atlanta, has a strict dress code. No sneakers are allowed, according to the restaurant’s rules, but a recent incident indicates its staff only enforces this rule on certain customers.

A video, which has been circulating on Instagram, YouTube, and Twitter this week, shows a Black man escorted out of the sushi establishment by a staff member. He is wearing clean white sneakers paired with dark pants and a long-sleeved shirt. In the background of the shot, several seated groups can be seen eating.

Lo and behold, another patron decided to don sneakers for her dinner out. An older white woman, seated just behind where the staff member and man are talking, is wearing metallic silver sneakers. The Black man can be heard questioning the restaurant’s reasoning behind targeting his shoes and not hers. His companion films the entire exchange.

“What’s the difference?” he asks as he is led away from the dining patrons. The majority of his exchange with the staff member is inaudible. The customer is clearly flabbergasted, however, as the evidence of bias stacks up.

The man remains calm, albeit baffled, as he continues to question the double standard. The staff member clearly doesn’t enjoy the continued questioning, but the Black man and his companion are rightfully confused. “How crazy is that?” the man exclaims, nearing the camera. “She has on Adidas sneakers. You’re telling me those are good?”

“This is pure racism, she has on Adidas,” he says. The staff member balks at this accusation but fails in his attempts to refute it. Rather than offer a convincing argument, he chooses to walk away. As the man’s companion, still filming, notes that the duo will “wait for the police,” the employee says that he is “more than happy to have a conversation” about the issue.

Umi staff members continue to dodge the couple’s questions throughout the exchange. Things soon get heated after the man, identified as Steve by his companion, attempts to gain the opinion of a man they claim owns the restaurant. When he dismisses their concerns, the two men nearly come to blows. His dismissal of the duo, without even entertaining their concerns, stuck with viewers, many of whom tagged the real reason they thought they were denied entry.

“Buckhead is trying to ‘make Atlanta white again’ I see,” one commenter noted.

The video, shared to Twitter by Everything Georgia, soon prompted Umi Sushi to trend. Users are using the trend to promote a boycott of the restaurant. Even fans of Umi are announcing their intent to avoid the restaurant due to the actions of its staff.

Update 12:38pm CT, Oct. 29: “This was completely, 100%, an operational mistake on our end,” Umi Sushi owner Farshid Arshid told the Daily Dot via statement. “When they got upset we should have investigated that.” Arshid said he has contacted the couple to work things out.