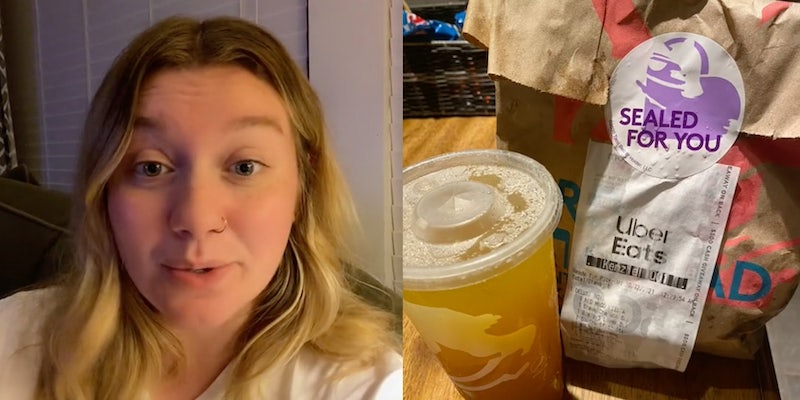 Apparently, the driver knew intimate details about her house.

Update 9:23am CT Oct. 15: When reached for comment, an Uber spokesperson said in a statement to the Daily Dot it began investigating the incident once it was made aware of it and determined the delivery was for a customer “few hundred feet away from the TikTok poster’s house.”

The spokesperson added that Uber is in contact with Prestes.

Original story: A woman has claimed that an Uber Eats driver is stalking her after the man allegedly showed up to her house at 1am with an order she did not place.

The woman, who goes by Bobbie Prestes on her Instagram, shared the ordeal on her TikTok on Wednesday in a video that has garnered more than 8.7 million views.

In the video, she claimed that the night before as she was asleep and her husband was at the front porch an Uber Eats driver showed up to their door with a Taco Bell order.

Prestes said her husband came in to ask her if she’d ordered Taco Bell, and she said she hadn’t. He then asked her if she remembered an Uber Eats driver who’d delivered to them in August.

“As soon as he said this, it just immediately triggered something in my head,” she said, adding that back in August they were sitting on the patio when a man in his 50s delivered to them and they had small talk.

He said he liked their house and the neighborhood and even went to the nearby elementary school as a child.

“He never had our order again after that, until last night,” she added.

The man then allegedly asked her husband if he remembered him, and commented on their pool being closed.

This further struck Prestes as odd because it was pitch dark at night and the pool area was fenced in, so she was wary of how he knew the pool was closed.

She said the order was for one “Kenzie” and processed shortly after midnight.

“Normally I would think this was just a mix-up,” she said, but she felt “uneasy” about the incident and did some investigation on her own.

She learned that her neighborhood doesn’t have any Taco Bells that are open that late.

In a follow-up video, she showed her followers the hours of her local Taco Bell: One closes at 9pm and the other, which is a bit further away, closes at midnight.

She said given where she resides, a small town, it’s extremely unlikely that any of her neighbors ordered Taco Bell that late at night, and that it would be delivered from an address far away.

The Daily Dot has reached out to Prestes for further information about the incident, and will update the report if she responds.

Prestes’ gut-feeling was validated by her followers who shared their concerns in the comments section.

“Yeah that don’t add up, the only thing it could really be was a gps mix up but that still doesn’t really make sense,” wrote one user.

“You know that feeling in your stomach? That’s your instinct. TRUST IT,” wrote one user.

“The fact that he knew the pool area was closed at 1am when it wasn’t even visible gives me stalker vibes,” wrote one user.

In the comments section of the follow-up video, some claimed that sometimes restaurants stay open after hours for delivery drivers to pick up orders. Though this doesn’t explain the man’s knowledge about their pool.

Some others shared similar concerns.

“Uber eats support is actually terrible when it comes to safety concerns! I had a delivery driver be verbally abusive to me,” wrote one user, claiming that the driver behaved that way when they requested the driver to drop the order at their door as they were quarantining at the time during the pandemic. The user claimed Uber Eats notified the driver about the complaint, identifying the complainant, which made them worry about their safety.

“We used to get ubereats delivered to our apartment almost everyday at 3a.m.,” wrote one user, adding that those were orders they didn’t place and that the delivery driver did not stop harassing them until law enforcement got involved.