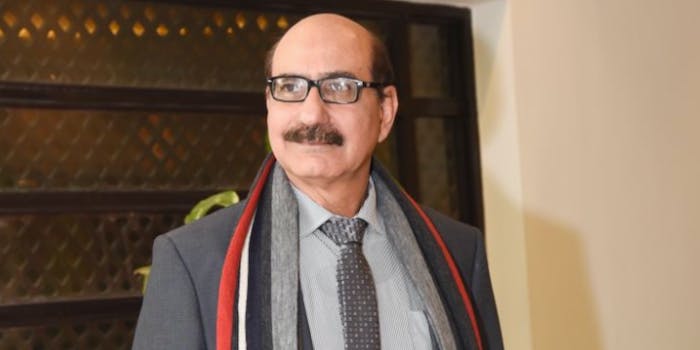 Two teenage girls were charged with felony murder after an alleged, botched carjacking attempt led to the death of a man working as an Uber Eats delivery driver in Washington, D.C., Tuesday afternoon.

A cellphone video captured the moment the girls, ages 15 and 13, allegedly tried to carjack 66-year-old Mohammad Anwar. The video, which was posted to social media and shared by the New York Post, purportedly shows some of Anwar’s final moments after the girls allegedly drove off with him clinging to the side of his vehicle, flinging him onto a sidewalk.

The girls allegedly “assaulted the victim with a taser while carjacking the victim which resulted in a motor vehicle accident,” the Metropolitan Police Department (MPD) said in a statement.

At the start of the video, the girls can be seen in the parked Honda as Anwar seemingly tries to get the teen sitting in the driver’s seat out of the vehicle.

“This is my car!” the father of three shouts in the video. “They’re thieves!”

The video shows the teen driving away with the driver’s side car door open. Anwar is in between the door and the rest of the car. The door seemingly slams into him twice after hitting a metal barrier and light pole.

The car continues down the block, eventually leaving the frame. However, crash sounds can be heard, and witnesses who were recording run toward the noises. “They stole the car. These girls stole the car,” a person filming the video says, rushing over to the scene of the crash.

National Guard troops in the area, according to the Post, can be seen helping the girls out of the vehicle, which was on its side after the apparent crash. Anwar is face down on a sidewalk.

Anwar was reportedly suffering from a head injury and broken bones while on the sidewalk. He was pronounced dead at a local hospital.

“Upon arrival, members located an adult male suffering from life-threatening injuries. DC Fire and Emergency Medical Services responded to the scene and transported the victim to an area hospital for treatment. After all lifesaving efforts failed, the victim was pronounced dead,” the MPD said in the statement.

The girls were stopped by police officers and a member of the National Guard after allegedly trying to flee the scene, according to the Washington Post.

The girls, who have yet to be identified because they are minors, were also charged with armed carjacking (Taser). According to the Washington Post, they have both pleaded “not involved” (not guilty in juvenile court).

According to a GoFundMe set up for Anwar’s family, the 66-year-old immigrated from Pakistan in 2014.

“Anwar was a beloved husband, father, grandfather, uncle, and friend who always provided a smile when you needed one,” the page reads.

The Daily Dot has reached out the Metropolitan Police Department.