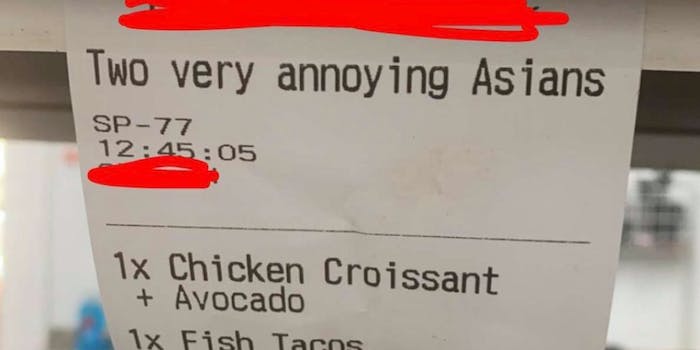 The owner then praised the worker who wrote it on Snapchat, saying, 'I love my staff.'

Two customers who dined at a restaurant in Brisbane, Australia, were reportedly referred to as “two very annoying Asians” by staff on their receipt.

The manager of the restaurant, who is also believed to be one of its owners, then praised the worker who penned the description by posting a photo of the receipt to Snapchat and saying, “OMG I love my staff.”

The receipt shows that the customers ordered a “chicken croissant avocado” and fish tacos on April 2. It describes them as “Two very annoying Asians.” It is unclear if a receipt with that description on it ever made its way to the customers as it appears to be a back-of-house docket.

According to a screenshotted Snapchat conversation published by the Daily Mail, at least one staff member confronted the manager over the receipt following his post. He told them to “get a grip” and called the receipt “just a joke.”

In response, they reportedly told him it is “job to call out behavior like that” rather than praise it and that he is acting “unprofessional and inappropriate.”

The manager apologized in a statement Daily Mail Australia.

“I personally wish to apologise for the offence and hurt caused,” he said. “I’m deeply disappointed and embarrassed at my actions as they go against everything I pride myself on.”

He added that he’s “been a business owner in the area for more than six years” and is “personally and professionally invested in diversity.” “Internally, my team and I will do better to ensure we uphold the diversity and inclusivity that is at our core,” he said.

It is unclear which restaurant the incident occurred at, though the Daily Mail notes it is “popular.”

The incident comes after another eatery in the area was accused of anti-Asian racism, according to the Daily Mail. Japanese eatery Nobunaga Yakitori reportedly launched a “virus-free menu” menu that included items such as a “Wuhan burger” and “bat wings.” Both incidents are indicative of the surge in anti-Asian racist incidents seen across the world in recent months.