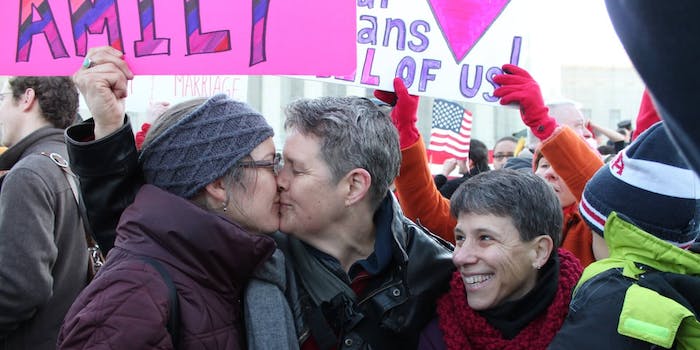 'A woman dropped her groceries when she saw me kiss my girlfriend goodbye today...'

A tweet by a Canadian editor that documented a stranger’s reaction to her kissing her partner has gone viral, inspiring others to share similar experiences and serving as a reminder that LGBTQ folks’ public displays of affection are still often met with shock or hate.

Erica Lenti on Saturday tweeted about a woman at the grocery store who “dropped her groceries” when she saw Lenti kiss her girlfriend.

“…and that’s the change I want to be in this world,” Lenti wrote.

A woman dropped her groceries when she saw me kiss my girlfriend goodbye today, and that’s the change I want to be in this world.

As people’s tweets attested, strangers’ reactions to the existence of gay people in public range from adoration to gross bigotry.

“When my wife & I were entering Target once, a woman grabbed both of her children, pulled them into her, then covered their eyes with her hands,” one user wrote. “As we passed, she pursed her lips, furrowed her brows, & shook her head at us.”

I remember folks wailing on FB about Oreo supporting Pride. “I’ll never eat your cookies again!” Bitch you will! They’re *Oreos*. So much as looking at a pack means you’re eating a whole row.

My wife & I stepped in an elevator in Nashville, woman asked me if we were sisters, said we looked alike. No, I told her, we’ve been together 20 years so maybe we have started to look alike. She gasped and grabbed her husband! You know she telling people she got hit on by lesbian

I once made a woman weep by kissing my then-fiancee (now spouse) on a London bus. Congratulations!

Some people shared being pleasantly surprised by a stranger’s support.

“When I was 23 and living in Italy, my male friend and I decided to kiss for the shock factor as a Catholic nun approached,” one Twitter user said. “The joke was on us. She calmly smiled, nodded and wished us buongiorno.”

When I was 23 and living in Italy, my male friend and I decided to kiss for the shock factor as a Catholic nun approached. The joke was on us. She calmly smiled, nodded and wished us buongiorno.

May the future hold more women like the one in this photo. pic.twitter.com/Oj4aZCtf4v

When I had rainbow hair for pride (see profile pic) a really old proper New Yorker man told me he liked it and we had a little chat and when he sat down on the subway I saw a tattoo with “Dave” and a date of birth-date of death in a heart. He saw me looking and just winked at me.

Some speculated about the staring stranger who dropped her groceries. Is she secretly gay and sad she’s missing out? Did she miss the memo that the year is 2019?

This would have been too perfect.

Was it because she realised she had been living a lie and all of a sudden felt that all she wanted to do was elope with her neighbour and gal pal Betty?

Some were cautiously hopeful that the stunned woman dropped her groceries “to do a slow clap” or because she “got all hot.”

To do a slow clap?

Maybe she got all hot?

I was really hoping that it was this kind of reaction too.

Some shared their anecdotes from the other side.

“I saw two girls holding hands at the grocery store and kiss and I was so happy I had to squat and cry,” one person commented.

We saw two women kissing outside of a Walmart. My 11-year old says, “Mom! Did you see that???” I take a deep breath and ask, “What’s that, hon?”, readying myself for a teaching moment. “That lady was VAPING. That is so dangerous.” And that’s how I know I’m a decent parent. 😍

Everytime I see a gay happen I go into cardiac arrest

One anecdote was particularly touching.

“I’d like to give a shout out to the lesbians I saw laughing and canoodling on the bus in Berkeley in 1983,” a user wrote. “15 year old vacation me probably stared at you in a weird way, but 51 year old queer me thinks about you often, and always with a grateful smile.”

I'd like to give a shout out to the lesbians I saw laughing and canoodling on the bus in Berkeley in 1983. 15 year old vacation me probably stared at you in a weird way, but 51 year old queer me thinks about you often, and always with a grateful smile.

While the Twitter thread was full of good humor, the underlying issue is obvious. It’s still not always safe for LGBTQ people to make public displays of affection. It’s only been three years since a shooter killed 49 people at Pulse nightclub, and the attacker’s father said the attacker was enraged after seeing two gay men kiss. In response, #TwoMenKissing took over Twitter, and people shared photos of kisses with their partners.

The hashtag clearly remains relevant. As Samantha Allen wrote in a 2017 Daily Beast report, “As much as Americans pledge support for LGBT people and as frequently as we recite the ‘love is love’ mantra, same-sex love still makes too many of us uncomfortable when we witness it firsthand.” The recognition of same-sex love isn’t enough just when it’s legalized and “on paper,” and allies have to do better “in person,” Allen wrote.

It’s one thing to make space in policies and the law, but the deeper change will be recognized when there is space for people to express themselves freely in the same manner as cis, straight people—especially in public spaces like grocery stores.