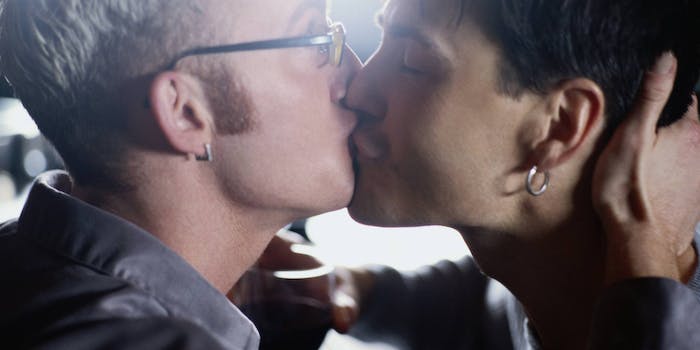 According to Omar Mateen’s father, his son was angered enough to shoot up an Orlando gay club by seeing gay men show affection toward each other. “We were in downtown Miami, Bayside, people were playing music. And he saw two men kissing each other in front of his wife and kid, and he got very angry,” said Seddique Mateen in a video he posted on his Facebook page.

If two men kissing is what offended the shooter, then #TwoMenKissing is what the internet is going to provide to combat such hate.

In retaliation to that news, Twitter has been flooded with the hashtag, accompanied by photos of, what else, men kissing.

My husband & I at wedding reception, 2008. If you don't like this, you're like a terrorist. Congrats. #twomenkissing pic.twitter.com/8TslauuyKG

The hashtag was started by author K.M. Soehnlein, who was angered by Mateen’s statement. “How could an image of love create such a violent backlash?” he told the Daily Dot over email. “I wanted my community to respond with a strong unified message, and so I asked my friends to ‘flood the internet’ with images of #TwoMenKissing. I hoped a few people would pick up on it. I’ve been overwhelmed by the response—I hear now it’s been shared over 10,000 times.”

It has also spread under the variation #2MenKissing. “Visibility has always been a political necessity for the queer community. Now, more than ever, we must stand together,” says Soehnlein.

OH NO! TWO MEN KISSING! Get used to it.#twomenkissing pic.twitter.com/rO2Hb7GUG2

If #twoMenKissing was the #Orlando shooter's motive, then let this be every hater's conditioning therapy. pic.twitter.com/OG52gCA20Z

There’s also an unaffiliated #2MenKissing T-shirt, with the proceeds going to Equality Texas. “If such a beautiful act could inspire such violence, then our society clearly doesn’t see enough images of kissing men,” said Bre Lembitz, who launched the #2MenKissing T-shirts.

Public displays of affection between two people of the same sex is still taboo in much of the world, even among people who believe themselves to be tolerant. “So, this T-shirt is just one of many ways I hope to play my part in the battle to normalize images of same-sex love. I suppose it is also a show of strength,” said Lembitz. “Instead of shying away from, or becoming afraid of the thing that ‘incited’ such violence, embracing it makes it a powerful symbol of strength and love.”