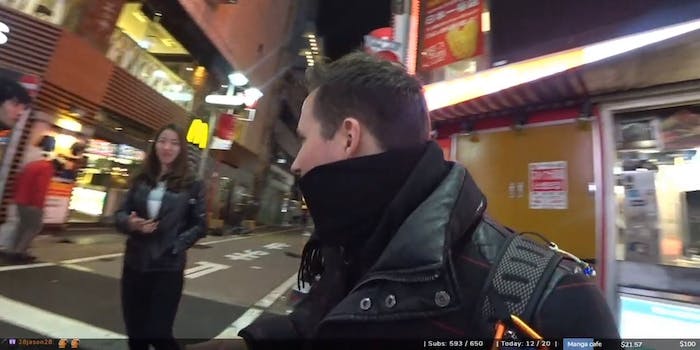 While hanging out in Tokyo and live streaming himself out on the town, Twitch streamer robcdee appeared to save a tourist who was in an awfully uncomfortable situation.

As his video shows, robcdee was hanging out on a street corner when a woman who appeared to be followed by a Japanese man entered his broadcast.

The man was walking closely next to the woman when she turned and saw robcdee. She turned toward the streamer and, while talking to the unwanted man next to her, said, “He’s my friend.” In the seconds before that, some redditors believed she was mouthing “Help me,” at Rob.

A few seconds later, the man walked away and the grateful woman confirmed to Rob that she had felt like she was in danger.

Later, Rob explained to the woman that some men in the country just “approach, approach” woman in the hopes of winning their favor.

Rob has had to play the role of savior before. On Halloween last year on the same street corner, he spotted a man who was following and perhaps harassing two women. Rob approached him from behind him, grabbed him by the arm and said he wanted to take a selfie. The man was more than willing and then, when they were done, the man walked in the opposite direction as the women.

“Haha,” Rob said to the camera, “they’ll thank me later.”