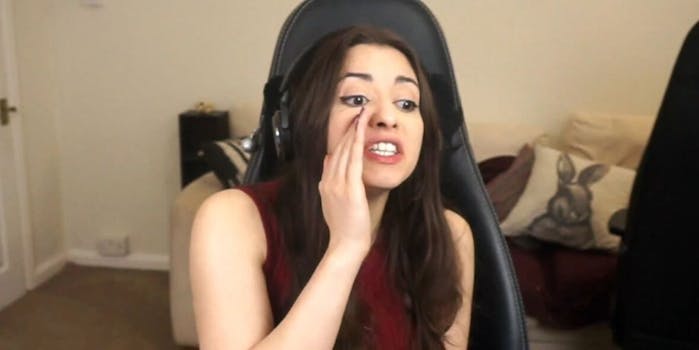 She's become a live-stream star. But this guy learned why the hard way.

Two pieces of advice if you’re an avid Twitch viewer who enjoys the stream of Sweet Anita. Since the tics caused by her Tourette’s syndrome often cause her to spew NSFW language that sometimes embarrasses her, it’d be best not to call attention to yourself in her chat if you don’t want to potentially get roasted by her.

And whatever you do, don’t tell her you’re watching her stream while at your job. Because she might make things extremely NSFW.

On Monday, as she was scrolling through her Twitch, she came across a comment that read, “Please not so loud. I’m watching you at work and I’m scared my boss will hear the stream.”

After she briefly covered her mouth and laughed at her outburst, she said, “Get out my country. Get out of my cunt.”

She immediately followed that up with, “Sorry, guys. I’m not sorry.”

As Anita explains on her Twitch page, “I’m from the U.K., and I have Tourette’s syndrome. This is why I am making strange sounds, whistling, popping, and swearing. My stream is for a mature audience only as I say some pretty inappropriate things about cats and Jesus.” She also has called her tics “obscene hiccups.”

But that hasn’t stifled her popularity. Eighteen months ago, Anita had about 16,000 Twitch followers. Now, she has about 660,000. Most of whom hopefully don’t tune in to her streams while they’re supposed to be doing their jobs.

Oh, and one last piece of advice for those who want Anita to distract them from their vocation during work hours. Perhaps consider investing in a pair of headphones.