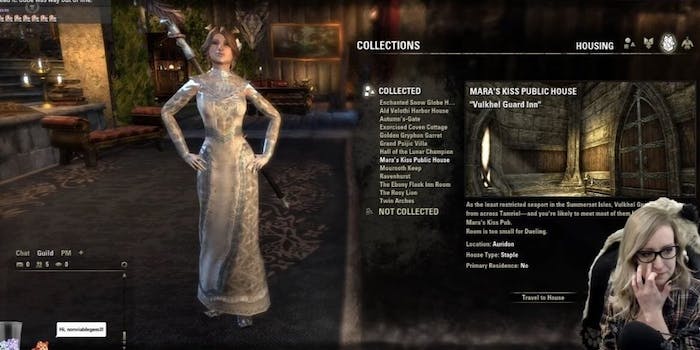 'I’ve been in pain. I’ve had my young life ruined by illness.'

A Twitch streamer who sometimes discusses the disabilities that affect her everyday life has lashed out against those who say they believe she’s faking her symptoms for sympathy.

In her stream earlier this week, Aeyvi read the tweet of at least one person who questioned her. On Twitter, a user named @InsideTruth7 wondered if she was paid to act as if she is disabled for “greed” and for “money and attention.”

Yet to get any proper sleep yet but just wanted to thank everyone for the overwhelmingly kind responses, I'll try to get back to as many as I can later. Also I've been told quoted text is gone so it doesn't make much sense so -just for ref- it's image below. x pic.twitter.com/cLZOMrYrjf

That greatly upset Aeyvi, who suffers from dysautonomia, a chronic illness that affects the autonomic nervous system and can cause fainting and other cardiovascular issues. As Aeyvi explained, there are times that, when she stands up, “the blood gets stuck, so the oxygen gets stuck, and the body doesn’t know what to do.” That leads to chest pains and dizziness, and sometimes, she suffers from stroke-like incidents that affect her facial muscles.

“Sometimes I’ll collapse like a sack of potatoes,” she said.

She continued by saying, “I didn’t spend a year and a half in a wheelchair for fun. I don’t not leave the house for fun. I don’t have to justify every illness. … I know I’m allowing these people to win by being upset by this. But I find it disgusting that anyone would ever fake an illness. I’ve been in pain. I’ve had my young life ruined by illness.”

Aeyvi streams herself playing The Elder Scrolls Online, and she has about 5,600 followers. As she read @InsideTruth7’s tweet live on-stream, she got more and more upset and her chat grew more and more supportive.

As she writes on her Twitch page, “Disclaimer: Although this doesn’t define the streams it feels important to mention I am a chronically ill and disabled streamer. This imposes some limitations in terms of game content and schedule, though I try my very best. If I am more unwell than usual or recently had an attack there will be a heart marker on the stream. Thanks for your patience and understanding.”

On Wednesday, she also tweeted this message for those who might not be understanding, writing, “Many illnesses and disabilities are invisible. Ignorance is not an excuse, nor is an archaic attitude. A person may not look chronically ill, in pain or disabled, they might be. Patience understanding & awareness is key.”

Many illnesses and disabilities are invisible. Ignorance is not an excuse, nor is an archaic attitude.

A person may not look chronically ill, in pain or disabled, they might be. Patience understanding & awareness is key.#chronicillness #disability #POTS #mentalhealth #Twitch pic.twitter.com/O2pgeo1A2i