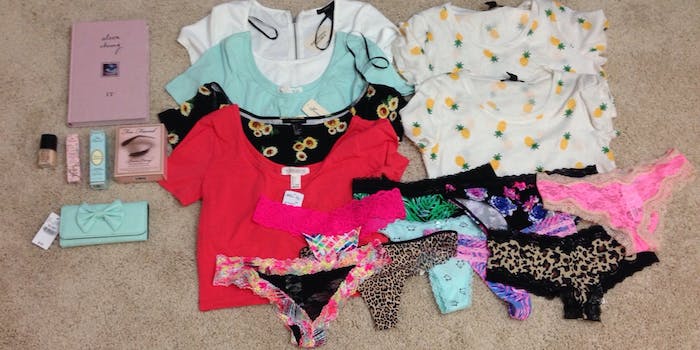 The wonderful thing about Tumblr is that it can generate a subculture for just about anything. One prime example is Tumblr’s shoplifting community.

Shoplifting bloggers came under the media spotlight in April and May this year, when a Jezebel writer stumbled upon a Tumblr post listing various shoplifting accounts. And yes, a shoplifting blog is exactly what it sounds like: Tumblrs where people write about their shoplifting exploits and posts photos of what appear to be stolen goods. Many of them use Tumblr tags like “shoplifting,” so it doesn’t exactly take Sherlock Holmes to track them down.

These posts share a lot of similarities with haul videos, where young women show off the results of their latest shopping spree. “Heres my haul for today!” reads the text post for this photo, tagged #shoplifting and #stealing. “I got like two more dresses but I gave them to my friend lol. The total is about $2,613. Hopefully I can sell some and make some monaay (´∇ﾉ｀*)ノ” 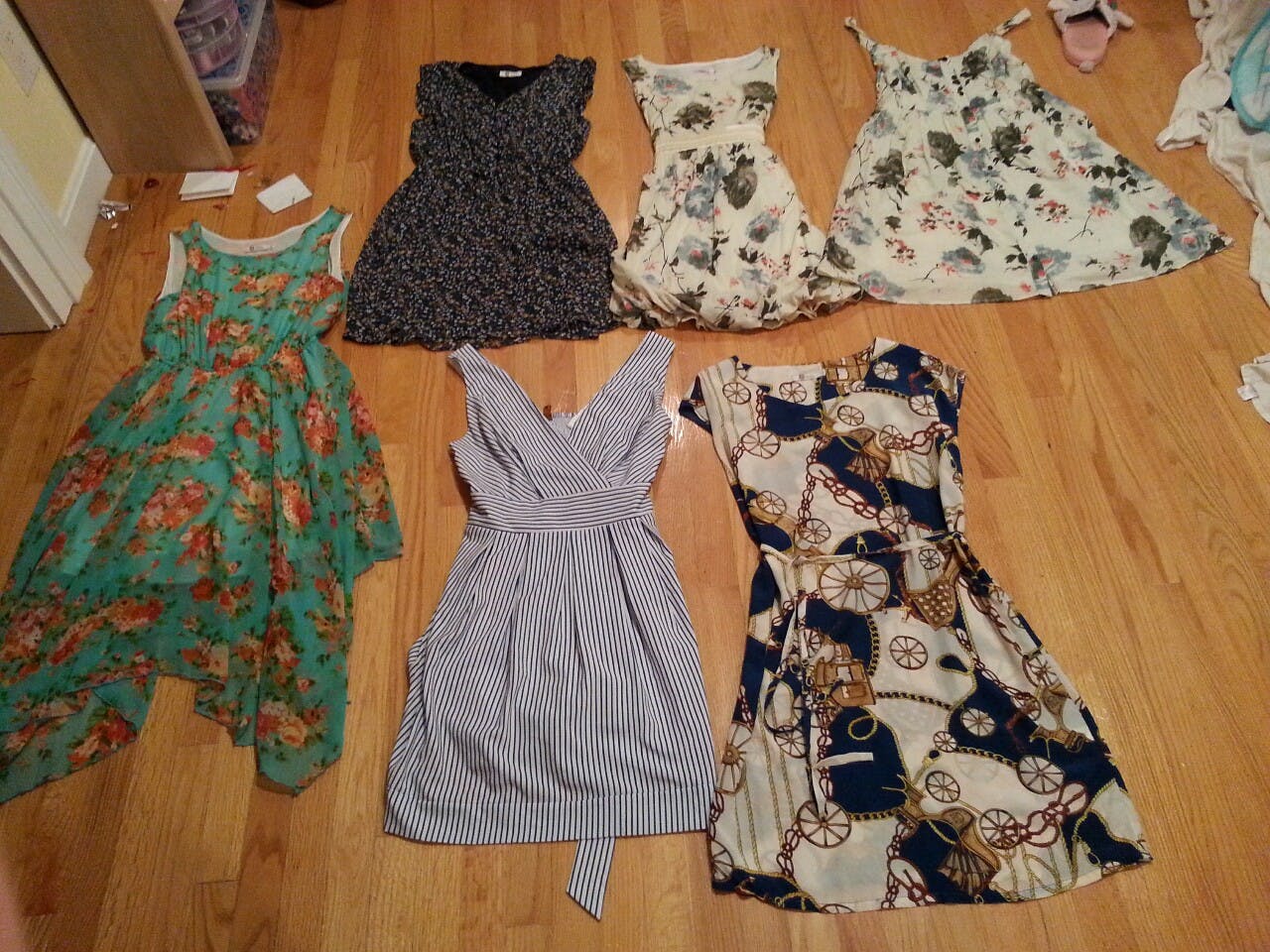 Four months after Jezebel’s “Tumblr Bling Ring” story was picked up by media outlets like the Daily Mail and the BBC, Tumblr’s shoplifting bloggers are still going strong. That sudden burst of unwanted outsider attention now seems like the kind of storm-in-a-teacup drama that happens in any Tumblr community or fandom. The main difference is that most shoplifting bloggers now post disclaimers saying that they’re not really stealing, they’re just roleplaying. “I post things I purchase with my own money and claim that they were stolen,” reads one. “It’s nothing more than a fun hobby.”

But while some blogs claim that shoplifting Tumblr is entirely populated by roleplayers, others are more critical of what one shoplifting blogger describes as “inconsistently applying the roleplaying excuse.”

“If you think that people truly believe that crock of shit you are only too gullible yourself,” they add.

Since all of the relevant Tumblr accounts are anonymous, it’s entirely possible that every single shoplifting blog really is a roleplay account. In some cases, the haul is so impressive that it surely has to be a hoax. Case in point, this post, in which someone claims to have shoplifted two live lobsters. 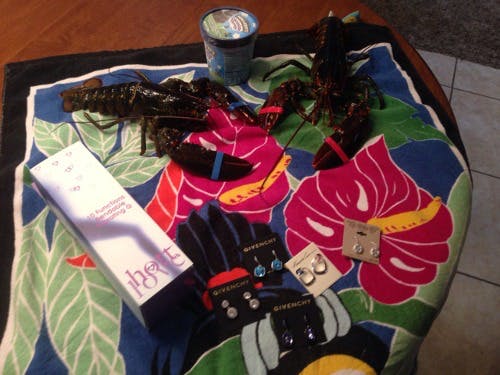 (People have actually managed to shoplift live lobsters in the past, so maybe this is less implausible than it seems.)

If we were to take all of those disclaimers at face value, then the idea of a thriving roleplay community might be even weirder than the assumption that they’re all the real deal. It would mean that people are going to stores, buying hundreds of dollars worth of clothes and makeup on a regular basis, and then claiming online that all of it was stolen.

Not only that, but they’re offering each other (allegedly fictional) shoplifting advice about how to find CCTV blind spots and deal with RFID tags, as well as discussing their philosophies of why it’s OK to steal. By the time you get to the in-depth walkthroughs of how to deal with certain shoplifting issues at certain stores, the roleplay excuse seems tenuous at best. 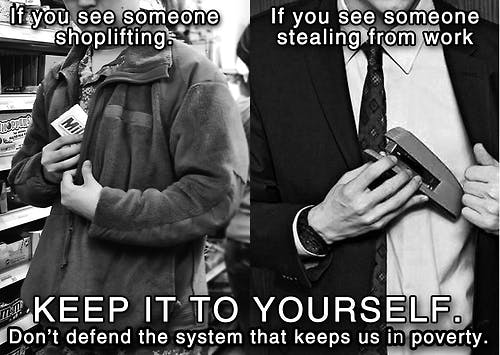 Two of the supposed arguments in favor of shoplifting are discussed in this thread, a classic of the Tumblr debate genre. First of all, is shoplifting anti-capitalist? Secondly, can you defend “kleptomania” as an excuse for shoplifting, from a social justice standpoint?

The original post in the thread is titled “The worst thing about the Tumblr shoplifting community is that they try to hide behind a legitimate disorder.” Here, Tumblr user disneyvillainsforjustice lays out the reasons why shoplifting bloggers don’t show the characteristics of “real” kleptomania. However, this argument is quickly smacked down by a couple of Tumblr users claiming to have an insider perspective.

“Very few if any of the actual ‘members’ of the shoplifting community believe that they have kleptomania,” writes one. “It’s a serious issue that needs counseling, shoplifting is not. Whether we’re stealing food we need to eat or clothes we need to sell to make money for our rent, or makeup because it’s just so damn pretty, we know what we’re doing. We aren’t trying to fight capitalism, we aren’t claiming to be kleptomaniacs.”

Of course, this person does not speak for everyone. Elsewhere on the site, people are still reblogging anti-capitalist shoplifting messages. The blog Shoplifting Against Capitalism could easily be a parody, but that doesn’t prevent it from being reblogged by accounts that look genuine enough. 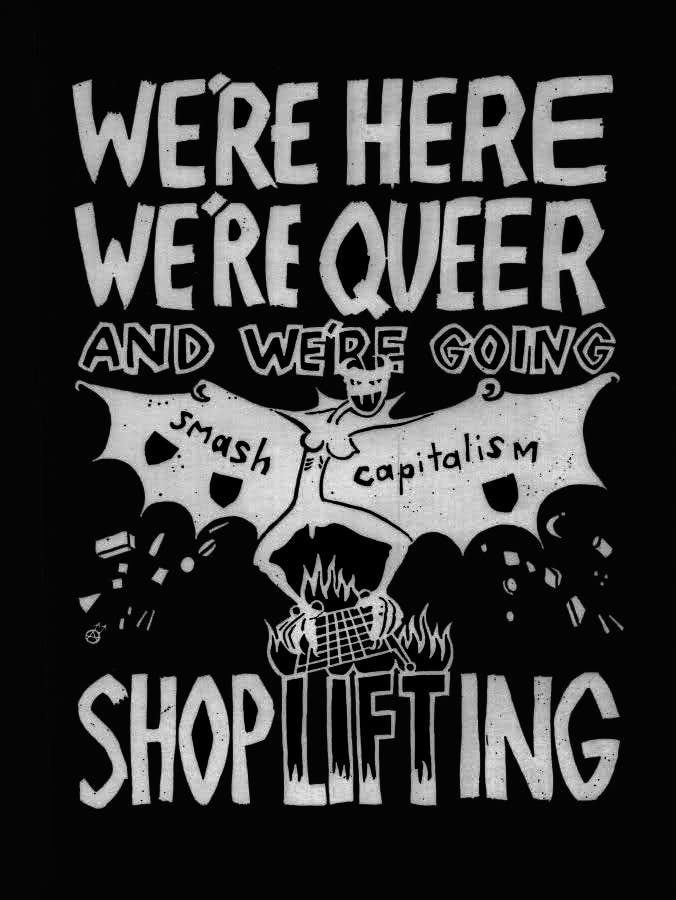 Spurred on by the media coverage of the so-called Tumblr Bling Ring back in May, some of these memes and advice posts have spread outside the community. As a result, there are now multiple posts from retail employees explaining why shoplifting isn’t anti-capitalist, because it usually hurts the workers more than it hurts the CEOs of retail stores.

For now, it seems that the extra media attention has barely discouraged people from posting their shoplifting hauls online. Their roleplaying disclaimers are rarely very convincing, but the anonymity of Tumblr means that most bloggers are relatively safe, unless a local police department suddenly wants to spend a bunch of time and effort investigating teen shoplifting blogs.

Plus, it wouldn’t be the first time people shared public social media posts about their crimes. Drug dealers post Instagram photos under the hashtag #weed4sale, and last year Tumblr was full of teenagers reviewing their illegal Silk Road purchases. The main argument in favor of shoplifting Tumblr being real is that yes, human beings really are that stupid.