Let this viral photo of two islands kissing teach you everything you need to know about the wasteland of fact-checking on Tumblr.

Tumblr, despite being a warm and fuzzy land of freedom and cat GIFs, is also a confusing wasteland where true information goes to die.

In a world where no one fact-checks anything, users are dead until proven alive, and trolls eat the gullible on a regular basis, how is anyone to know whether these two Greenland islands are actually kissing each other? 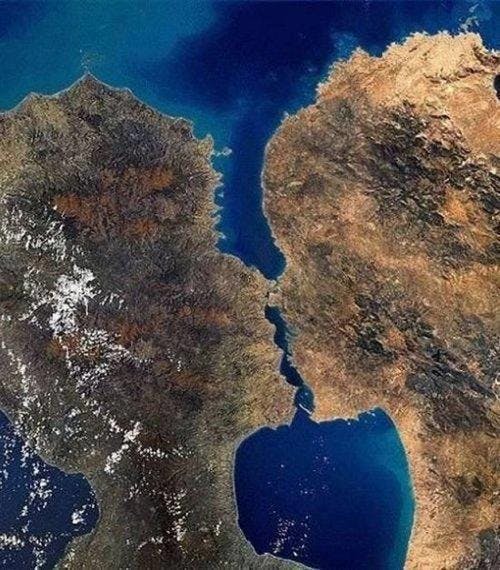 OK, Tumblr. You might have only just discovered this post, and it might have gotten 100,000 notes in three weeks, but there are some basic signs that should tell you that this picture is a fake. If you learn to recognize them, it will help you survive not only basic geography questions, but most of what Tumblr can throw at you.

The Problem: These islands appear to be having an intense makeout session. Adorable, right?—if it’s true. And that’s the problem with Tumblr: How can you find out what is and isn’t real? What alarm signs tell you that something might not be real?

Let’s take a walk through the ins and outs of their love, because believe it or not, knowing whether or not two islands are kissing is a vital Tumblr survival skill.

1) Sign No. 1 that something’s not right: Your gut tells you it’s too good to be true.

This is the most important clue, and it’s simply common sense: if something seems almost too good to be true, or conversely, too awful to be true, it nearly always isn’t.

To put it plainly: this picture looks too good, too tailor-made for Internet meme fame, to be real.

The corollary rule is also true. If something sounds too horrible to be true—specifically, too tailor-made to spark outrage in the reader—you are most likely being trolled. (See: Landover Baptist and The Onion, two parody websites that despite their well-known status as Internet trolls have been successfully sending various Internet users into fits of rage for years.) Does it sound too awful to believe that Miley Cyrus thinks being black is “just a vibe”? Then it probably actually is too awful to be real.

2) Now that your suspicions have been aroused, question everything.

Here are a list of basic questions you need to ask yourself any time the red flags go off—which, on Tumblr, happens pretty much constantly:

If you haven’t, chances are it’s a hoax. For instance, if Miley Cyrus actually had said that being black was just a “vibe,” you can bet it’d be everywhere. Like, oh, in Vibe.

Again, checking the reblogs can help because if it’s a public incident chances are multiple people on Tumblr were there and will be commenting on it and providing further info.

This is especially important for the Greenland image, because since it’s a satellite photo, if it were real, there would be all kinds of tourist photos of the islands floating around. Instead, when you search, you just get the same image over and over.

This is a question that can help you navigate the legion of “fake” GIFs on Tumblr. It’s one that paranormal investigators use when they investigate hoaxes of the supernatural sort. While some cameras really do happen to capture the extraordinary, the vast majority aren’t just turned on by coincidence.

In the case of the Greenland islands, although the image could easily have been rotated, one of the first immediate questions is ‘why are the islands posing for the camera?’ And, of course: who happened to be perusing the geography of Greenland on Google Earth to do a screengrab at that particular angle?

If either of these seem plausible, you could be being trolled.

If the answer is an obvious yes, then you probably don’t need to go any further. For example, in the wake of Yahoo’s Tumblr buyout, posts like this one are still making the rounds even though they’re obviously hoaxes.

Now that you’ve established what questions you need answered, it’s time to…

Linking to sources for context, verification, and additional info is Tumblr’s first line of defense against misinformation. On Tumblr, you can often find a source by checking at the bottom of the post to see if one is listed (it’ll say “Source”), or by mousing over a photo to see if there’s a click-through link.

4) Check the reblogs to see if other people have more information.

For example, to use another unsourced cute Nordic anecdote about free love, checking the reblogs, I quickly found someone linking to an Icelandic news article with more info. A little Googling & translation gives you the additional info that while the anecdote could be real, the festival in question actually hasn’t happened yet.

5) Let Google (or your search engine of choice) work its magic.

OK, kids, time to get down to the nuts and bolts of your quest for knowledge. You don’t have to do all these things every time, but having these tools at the ready will save you endless amounts of time.

If there’s no source, Google it.

If it’s a frequently searched term, the search engine will help you out. When I went to Google “Greenland islands,” Google helpfully asked me if I meant “Greenland islands kissing,” which told me that if there were verifiable sources out there, I’d probably find them. Alas, it turned out to be harder than that.

This is your quickest and easiest way to tell whether something is true or false: if it’s true, it will have been talked about in multiple ways and multiple times.

In the case of the Greenland image, there were no other photos of the two islands, and all the “sources” for the story were simply using the same photo. That’s a big tip-off that the image is a fake.

Note whether all the urls in the search results are also Tumblr URLs.

If they are, and there’s not an immediately recognizable non-Tumblr-based high-ranking link with more info, then the post most likely doesn’t have a verifiable origin point as news.

Googling the Greenland islands photo took me to an endless number of Tumblr URLs of people reblogging the same post: another big clue-in that the post was a viral meme rather than a real satellite image.

Do an exact text search.

Often an unsourced photo will have a text caption that you can use to do an exact text search (a search where a phrase is in quotes, so only that phrase with the words in that exact order, gets run through the search engine). For instance, the source for this post about the gender wage gap is missing, but an exact text search for the words in the article nabs you this CNN article as the source.

Do a reverse image search.

If a photo isn’t sourced, a reverse-image search, which can be done on Google or TinEye, is one of the quickest ways to find the author/artist/source url.

How to do a reverse image search:

Right-click the image and click “copy image location.” Then open up TinEye or Google. On Google Image Search, click the little camera at the top right of the search bar, then paste the image URL into the new pop-up window.

This is a vital tool in the endless quest to make sure artists and fanartists have their works properly cited and acknowledged on Tumblr—but it’s also super helpful for fact-checking, too.

For instance, wait for it, another post about a Northern European country making us all smile doesn’t have a source, but a quick reverse image search turns up a Wall Street Journal article proving that it’s all wonderfully true. For added Tumblr karma, throw the WSJ link into your reblog of the post, and spread information along with good cheer.

So what did I find when I googled the Greenland islands?

This was a little tricky. The pictures as a meme seemed to originate from the bowels of a Russian image site called Trinixy around 2007. But the spread didn’t start until about a year ago, when a Reddit thread quickly debunked and identified the source of the images as a Pfizer ad by graphic artist Vincenzo Micarelli.

Sorry, Internet. No romantic Greenland for you. Here, have some real kissing islands, instead— the “Fighting Cockerel,” or “Kissing” islands in Ha Long Bay, Vietnam: 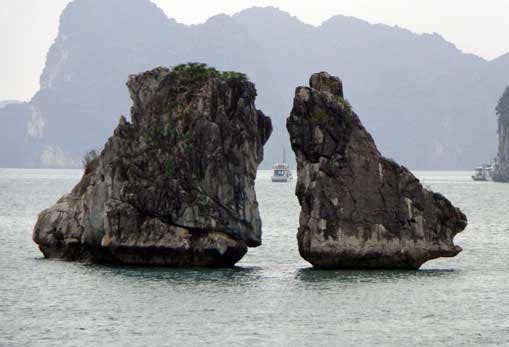 6) Once you find the original source, reblog and pass on the information.

Being a good skeptic means also being a good steward of your new information. When you find out something isn’t true, pass it on if you can—or at least the person you got if from.

We’ve all been fooled by Tumblr hoaxes. They’re the curse of an Internet life. But in an age where technology is increasingly sophisticated, more people have access to it, and more people are accessing the Web every day, we can no longer rely on Snopes to debunk everything for us.

So be a good Tumblr Samaritan. Think before you reblog, source your posts, and don’t believe everything you read. If you see a hoax, sound the alert.

Sure, it’s just a fake photo of Greenland. But in the long run, it’s really how we engage with the vast universe of information available to us: how we think critically, and how we learn to avoid being duped—perhaps next time by someone who may not be as nice as Greenland.

Photo via Helloworldtour and Vincenzo Micarelli