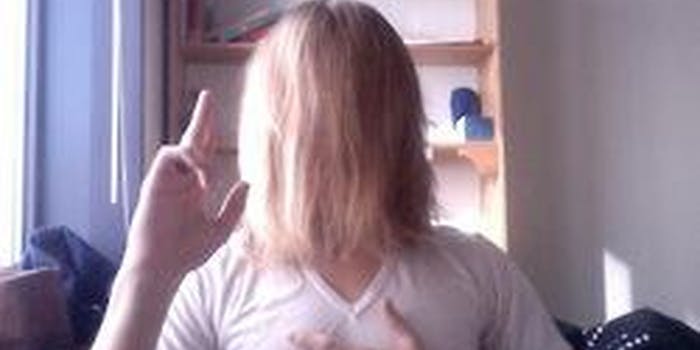 The Suite Life star Cole Sprouse joined Tumblr as part of a personal social experiments. His fans did not appreciate the results.

When fans of Cole Sprouse heard he was joining Tumblr, they were delighted. Little did they know he was only doing it to creep on them for a little bit.

Famed for his Disney Channel series The Suite Life with his twin brother Dylan, Sprouse is a young, tousle-headed heartthrob who drew lots of attention when he tweeted the link to his Tumblr account, coletureconcept, in late September to his 144,000 Twitter followers. Preserved through reblogs as well as an entire archive Tumblr account, Sprouse posted thoughtful interactions with fans along with musings on life, celebrity, and other things. “I’m in love with Tumblr right now,” he tweeted on November 4. “SO AWESOME!”

But two weeks later, the shine had evidently worn off.

Before he deleted his Tumblr, Sprouse made a post that stated rather cryptically, “So my goal for this website was accomplished.  I got all the information that I needed and now I’m deleting this account.”

Sprouse went on to imply that he had been engaging in a covert operation to study the people around him on Tumblr:

[E]very time I enter a space I try to become aware of what I step into and change my color accordingly.  The way I move, feel, argue, and all the discourse of my life, changes in order to succeed within that space. This adaptation to environmental and social pressure will allow me to succeed, much like Darwin had so brilliantly noted. You take a role and embrace it, but know that you arenever [sic] whole, and those who fall in love with you or otherwise fall for your performance, not you, for you is never constant.

My life is lokinous, but there are many levels to deceit, and cheating is only frowned upon when you’re caught.  So goodbye and remember that the next time you see or hear from me I will, most definitely, be a changed man.

True to his word, Sprouse closed out his account and followed up his last post with a series of tweets, now deleted, implying that the whole setup was a sort of elaborate mind game: 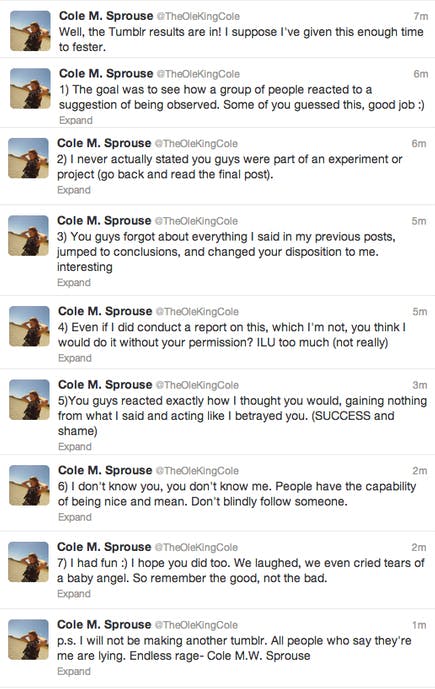 Tumblr users were outraged and took to Twitter to berate him. This response, from just-like-glass12 on Tumblr, is typical. The original Tumblr post has since garnered nearly 18,000 reblogs from outraged Tumblr users.

Later, perhaps realizing how large the backlash was, Sprouse apologized, tweeting that it was all a sociology project and reneging on his previous statement that he would never return to Tumblr. “All my fans right now are so sad and angry with me,” he opined.

Although he protested, “im still here..Im still on the internet,” fans were more upset that he had, so they felt, used them as guinea pigs in a social experiment without their knowledge. At the moment, Wikipedia’s page for the name “Cole” lists Cole Sprouse as an example—along with the following definition:

Meanwhile, Sprouse continues to nurse his wounds: “Only my real fans understand me and are supporting me now no matter what,” he stated Sunday.

Perhaps he should have considered how many “fake” fans he had on Tumblr before he deleted his account.