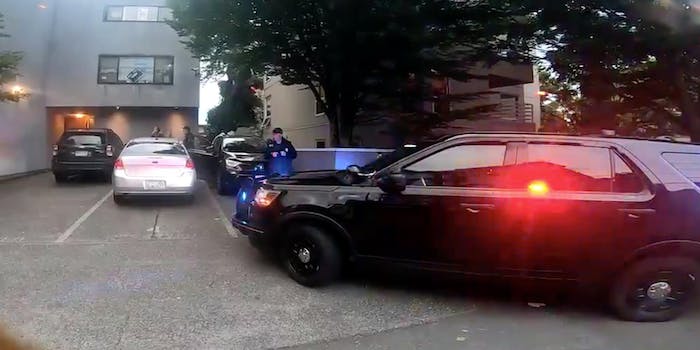 After watching the video, people are claiming 'cops are seeking revenge on protesters.'

A woman in Seattle was arrested after police say she live-streamed herself backing a vehicle into several officers during a protest on Monday.

The arrest, which saw 32-year-old Laura Eberhard taken into custody on Friday, was captured on video and went viral on Twitter.

The footage has been seen more than 3.5 million times on Twitter, where people have alleged that “cops are seeking revenge on protesters.”

Eberhard can be heard shouting “I’m not resisting” as an officer states that she’s under arrest for “multiple counts” of assault against police officers.

“You assaulted me and you assaulted another police officer,” an arresting officer can be heard saying.

Police say pepper spray was used after a struggle ensued with Eberhard.

Speaking with BuzzFeed News, Eberhard’s aunt Rebecca McKee stated that they had been unaware that their vehicle had touched police during the protest.

“She tapped a police officer’s bike, apparently, so now they’re saying she assaulted a police officer,” McKee said. “But in the video, you can clearly see she wasn’t screaming at the police, she wasn’t being violent, and she probably didn’t even know she’d hit the cops, otherwise she would have said something.”

But according to officers, who located Eberhard after her license plate was captured on body cam, the incident left one officer named Winngham with back pain after the vehicle ran into him with “significant force.”

In her live-stream, Eberhard is seen at one speaking with a protester who requested she create a perimeter with her car for when police arrive.

“Watch out. I’m going to create a perimeter,” Eberhard said. “Here they come.”

Eberhard then began to slowly reverse her vehicle as a group of officers approached on bicycles. BuzzFeed News notes that “at least two officers appear to be pushed on to the curb — but they keep cycling.”

Police have pointed to Eberhard’s footage as well as a Facebook post as evidence of her intent. The Facebook post showed an image of a Star Wars Speeder running over Storm Troopers. The phrases “This machine kills fascists” and “ACAB,” an acronym for All Cops Are Bastards, are also on the image.

McKee has since argued that officers are exaggerating the incident in order to target Eberhard.

“It wasn’t an intentional thing,” McKee said. “They arrested her for a bunch of bullshit.”

Officers on scene say they did not arrest Eberhard during Monday’s protest due to her daughter being in the vehicle.