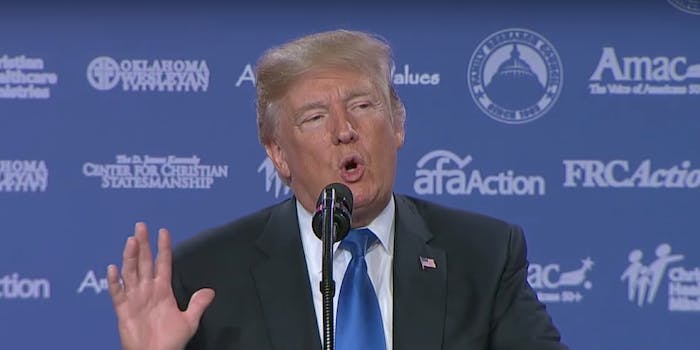 Trump said he was 'honored and thrilled' to speak at 'this incredible gathering of friends, so many friends.'

Trump, who is the first sitting U.S. president to speak at the event, said he was “honored and thrilled” to be present at “this incredible gathering of friends, so many friends.” He was received with cheers and applause.

“It’s great to be back here with so many friends at the 2017 Values Voter Summit, and we know what that means. We know what that means,” Trump began. “America is a nation of believers, and together we are strengthened and sustained by the power of prayer.” His speech included condolences for the victims of the recent Vegas shooting, the flooding in Texas and Puerto Rico, and the wildfires in California, and he talked about respect for the flag, to raucous cheers. Throughout the speech, Trump returned to themes of the nation’s unity, faith, and family values. “We love our families, we love our neighbors, we love our country,” he said. “We cherish the sacred dignity of every human life.”

Some of the attendees might have different ideas, however: At the summit, guests received tote bags with flyers promoting an “important new book” called The Health Hazards of Homosexuality.

“Finally: the truth about this public health crisis,” the flyer reads. It says the “‘gay’ and lesbian sexual practices” are among dangers to the “broader public.” The flyer adds that “homosexual and bisexual men” are to blame for “the recent increases in STDs.” The book, authored by anti-LGBT group MassResistance, also describes the “disproportionate incidence of disease and mental disorders in the GLB community,” according to the flyer.

The president is addressing the Values Voter Summit today. Here's what they're giving guests in a swag bag: "The Hazards of Homosexuality" pic.twitter.com/eRufvSncc0

The FRC, which organized the Values Voter Summit, has been designated a hate group by the Southern Poverty Law Center (SPLC), which says the group’s “specialty is defaming gays and lesbians.”

Joel Kasnetz, a spokesman for the Democratic National Committee, also denounced Trump’s visit, according to BuzzFeed.

“Today, Donald Trump reminded us that he is one of the country’s biggest threats to LGBTQ people,” Kasnetz told BuzzFeed. “The anti-LGBTQ bigotry on display at Values Voter Summit should be rejected, but instead was honored with visits from the president and a full slate of top Republican officials.”

In the 2016 presidential election, Trump—despite being opposed to gay marriage—had positioned himself through tweets and speeches as an LGBT ally in contrast to other conservative candidates.

Since the election, however, Trump and his administration have aligned with anti-LGBT organizations, people, and policies. Notably, the LGBT page disappeared from the official White House website on the day of the inauguration, and Trump did not acknowledge Pride Month in June.

On Wednesday, Sen. Al Franken (D-Minn.) tweeted he is “deeply concerned by the Trump administration’s hostility to #LGBT rights.”

I am deeply concerned by the Trump administration’s hostility to #LGBT rights.

In his speech at the Values Voter Summit, Trump also received raucous applause for defending the religious values of Christian conservatives.

“We’re getting in that beautiful Christmas season that people don’t talk about anymore,” Trump said. “They don’t use the word Christmas because it’s not politically correct… Guess what? We’re saying ‘Merry Christmas’ again.’”