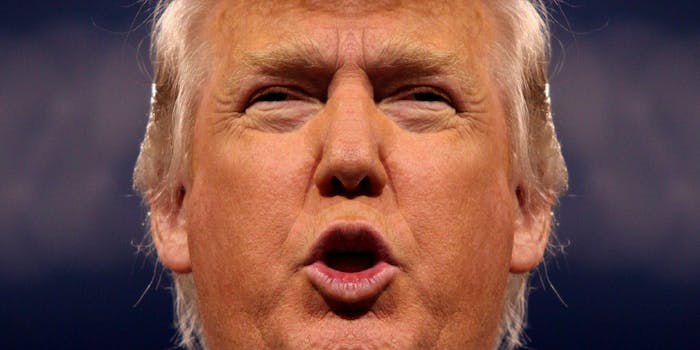 Each year he was in office, President Obama honored June as Pride Month with an official proclamation dedicated to the American LGBTQ community. This year, President Trump doesn’t seem quite as interested in maintaining that tradition. According to a list of proclamations published on the official White House website, there’s no mention of Pride Month at all from the White House.

On May 31, President Trump issued various proclamations honoring communities across the nation, from National Caribbean-American Heritage Month to National Homeownership Month. However, Trump has decidedly passed on honoring the LGBTQ community, breaking from eight continuous years of proclamations from the Obama administration.

.@realDonaldTrump couldn't be bothered to issue a proclamation to recognize #LGBTPrideMonth. Given his record, maybe it's for the best. pic.twitter.com/EwwYU9TLC0

Originally, President Bill Clinton issued the first Pride Month proclamation for June 2000, at the end of his presidency. President George W. Bush later passed on honoring Pride Month, but President Obama saw June as an opportunity to speak openly about problems that queer Americans face, from anti-LGBTQ harassment to conversion therapy. Over the course of his administration, Obama turned Pride Month into a time for celebration and activism, something critics say Trump is avoiding.

“LGBT Americans face an assault on their rights from the White House and House Republicans, who are gutting HIV prevention and treatment initiatives, dismantling protections for transgender children in public schools and conspiring to render LGBT Americans invisible in the census,” Pelosi said in an official statement.

Suffice to say, activists jumped on Twitter to criticize the president. While many were unsurprised, citing Trump’s poor track record with the queer community, LGBTQ advocates harshly criticized both Trump and Republicans for allowing the president to reject the occasion.

Surprising absolutely no one, the Trump Administration today said it would not be issuing a statement recognizing LGBTQ Pride Month.

Fitting that Trump plans to pull out of climate accord on first day of Pride Month. His agenda is always to take America backwards.

2. Since the Trump White House is pretending Pride Month doesn’t exist, let’s reflect on the historic LGBT achievements of the past decade.

But perhaps BuzzFeed’s David Mack puts advocates’ gripes most succinctly, arguing that the president simply pandered to LGBTQ Republican votes to win the election. Once the campaign was over, however, his dedication to the LGBTQ community became non-existent.

It's Pride Month. Will Trump issue a proclamation? Or did he just want LGBT votes? pic.twitter.com/gZhD05FwMV