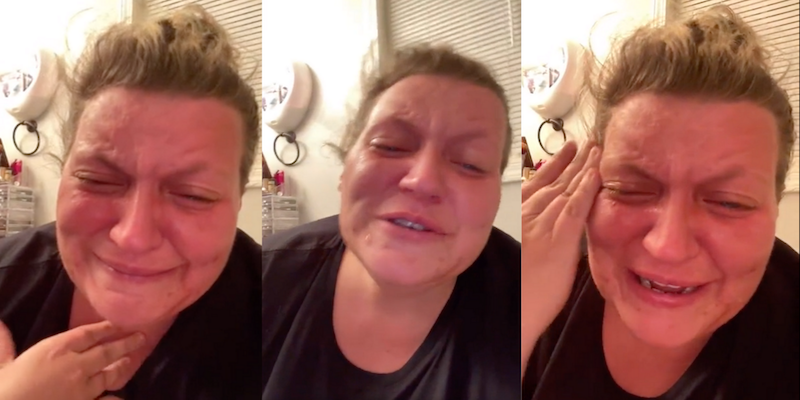 'President Trump, if you see this, please save us.'

Not everyone is celebrating the inauguration of President Joe Biden and Vice President Kamala Harris. A video posted on Reddit’s r/PublicFreakout page on Wednesday shows a Donald Trump supporter having a total meltdown.

The woman’s face is red, and tears stream down her cheeks as she says, “President Trump, if you see this, please save us.”

Trump bid his farewells to supporters at Joint Base Andrews Washington on Wednesday and did not attend Biden’s inauguration. “We will be back in some form,” Trump said in his parting words.

In the video, the woman says she’s on the verge of a panic attack, and her voice breaks as she pleads for help. “God please save us,” she cries. “Save us from the devil.”

Some redditors were empathetic towards the woman’s emotional breakdown. “I clicked on the video expecting it to be funny, but that’s just sad,” @rollingwithmahomes said. “Showing compassion now is the difference between us and them.”

Others made references to Chris Crocker’s infamous “Leave Britney alone!” video and called the woman a snowflake.

The woman in the video goes on to say, “I don’t even see our American flag anymore. Biden’s talking with some kind of crazy flag.”

She could be referencing the flags that hung on the Capitol on Wednesday, including the Betsy Ross flag that has 13 five-pointed stars arranged in a circle to represent the 13 original colonies.

Redditors criticized the woman for saying “This is America. This is our land,” and pointed out America’s history of assimilating, relocating, and colonizing indigenous people.

The video ends with the woman saying, “This is awful. God, please save us. Please.”