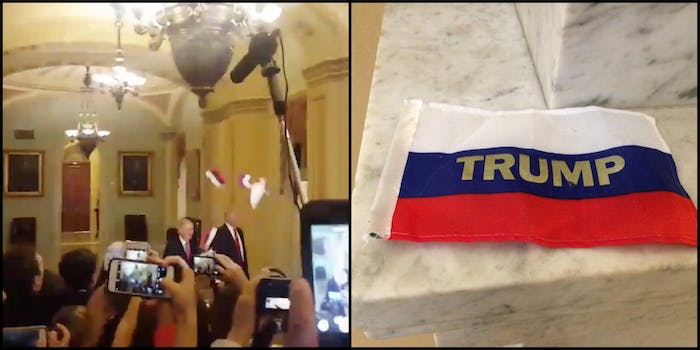 The anti-Trump activist created quite a stir.

A protester on Tuesday threw Russian flags at President Donald Trump and yelled “treason” as he headed into a Capitol Hill meeting with Republican senators.

The protester, who reportedly identified himself as Ryan Clayton, stormed through the press area before tossing the flags, which were emblazoned with “Trump,” and repeatedly yelling, “Trump is treason!” Police quickly escorted him from the scene.

Several journalists in attendance captured the moment on video.

Protester ID’d self as Ryan Clayton from Americans Take Action got very close to Trump and threw these flags at him pic.twitter.com/hIk1v2qpHS

This is not Clayton’s first anti-Trump stunt. A member of the activist group Americans Take Action, Clayton is part of the group of pranksters who passed out similar Russian “Trump” flags during the 2017 Conservative Political Action Conference (CPAC) in February.

Crowd at CPAC waving these little pro-Trump flags that look exactly like the Russian flag. Staffers quickly come around to confiscate them. pic.twitter.com/YhPpkwFCNc

Americans Take Action says its mission is to restore integrity to U.S. elections following Russia’s attempts to interfere in America’s democratic process during the 2016 election. Trump has consistently painted talk of Russian interference as a fake scandal used by Democrats as an excuse for Hillary Clinton losing her White House bid.

The Trump campaign is currently under federal investigation over 2016 staff members’ ties to Russia, while the president is being investigated for potentially obstructing justice for firing former FBI Director James Comey while the bureau was actively investigating Trump’s former national security adviser, Michael Flynn.

Trump met with Republican senators on Tuesday to discuss tax reform and other issues on their legislative agenda. The meeting comes just hours after the president attacked Republican Sen. Bob Corker of Tennessee, a vocal Trump critic, who responded by characterizing Trump’s behavior as “the debasement of our country.”