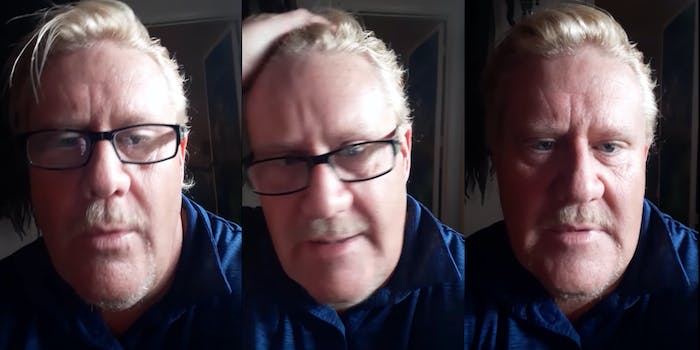 He appears to hide from someone right before the video ends.

Trent Paschal, 48, is accused of killing his estranged wife Savannah Paschal, 30, on Oct. 21. Right before he allegedly ambushed and fatally shot her, it is believed that he recorded a chilling YouTube video.

In the video, which was apparently uploaded to the channel BigMoney-T on the same day the killing took place, he apologizes to his two children and seemingly tries to justify his future actions by accusing Savannah of infidelity. According to multiple reports, they were estranged.

Toward the end of the video, Trent abruptly cuts himself off and appears to hide from someone. It was later discovered through court documents that Trent allegedly hid in a shower to ambush his wife as she arrived home with her mother, according to Click 2 Houston.

Trent, according to the documents, jumped out of the shower and told Savannah and her mother that he was going to shoot them. He shot Savannah twice in her stomach, and her mother managed to escape.

“[Savannah’s mother] shut the bathroom door on Trent, and started running out of the bedroom, toward the front of the house,” the documents read. “As she was running away, she heard gunshots.”

Savannah’s mother returned after Trent fled the home, and first responders were called to take Savannah to the hospital, where she was pronounced dead.

After the shooting, Trent reportedly called Savannah’s aunt and confessed.

According to Click 2 Houston, Trent was later shot by a Harris County sheriff’s deputy after refusing to put down a gun. He is expected to survive his injuries and has been charged with murder.

His apparent YouTube video has been viewed nearly 70,000 times.

Update 7:19pm CT, Oct. 24: When reached for comment, Ivy Choi, a YouTube spokesperson, told the Daily Dot in a statement: “The channel flagged to us by The Daily Dot has been terminated for violating our violent or graphic content policy, and re-uploads of the original video will be removed. Over the past few years, we’ve heavily invested in the teams and systems that allow us to quickly detect and remove content violating our Community Guidelines and in Q2 2020, we removed over 1.2M videos for violating our violent or graphic content policy.”