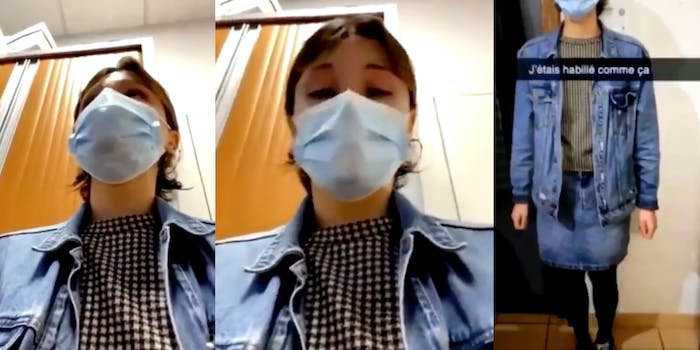 In addition to the video, Avril also posted a photo of her outfit to Snapchat.

A transgender teen in France died by suicide about a week after she filmed a guidance counselor yelling at her for wearing a skirt to school, according to Out.

Avril, 17, posted the video to Snapchat in early December. In it, the counselor says, when speaking to Avril in French, “I understand that you want to be yourself. I understand that perfectly.”

“Everything I’m doing now, it’s to better help you. That’s what you don’t understand!” the counselor screams as Avril cries, according to multiple reports. “Because, once again, some people have different opinions than you do and aren’t your age. It’s that simple. They don’t have the same upbringing.”

Avril tells the counselor that those people are “the ones who need to be educated, not me.”

The counselor interrupts Avril to agree with her. “Then I don’t understand why you have a problem with me,” Avril says.

Avril also posted a photo of her outfit to Snapchat, writing, “This is what I was wearing.” In the photo, she is wearing a jean skirt, which goes well past her fingertips when her arms are by her side, with black leggings underneath.

About a week after sharing the video to Snapchat, Avril died by suicide. Her school, Lycée Fénelon, said, according to the magazine, that it was not responsible for her death. In the school’s statement to Le Figaro, it reportedly deadnamed Avril and used masculine pronouns when referring to her.

“It is very complicated to understand what happens in the head of a young person who makes this kind of decision,” Jean-Yves Guéant, leader of the school’s PTA, told Le Figaro. “But it’s obvious that the school bears no responsibility for this.”

Guéant also admitted that the school sent Avril home early because she was wearing a skirt.

According to Out, people across the country are expressing outrage over Avril’s death on social media. Her death, according to LGBTQ Nation, is also raising concerns about the treatment of transgender teens within the French school system. Hundreds attended a vigil to honor Avril’s life at Lycée Fénelon in Lille on Friday.