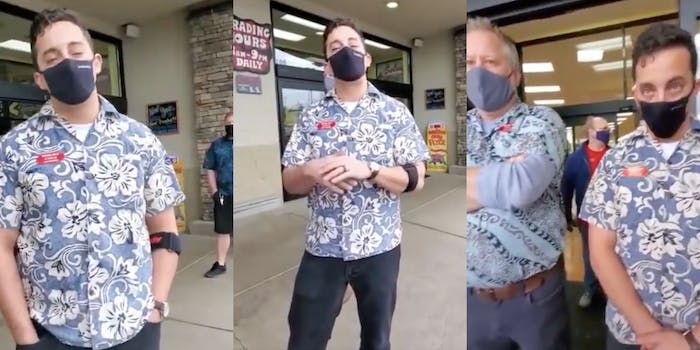 Nearly a year into the pandemic, the Karens are still at it.

After nearly a year of living with the coronavirus pandemic, it’s remarkable that any retail employee could have the patience to calmly shut down a mob of belligerent, anti-mask Karens. Nevertheless, that’s exactly what a Trader Joe’s manager does in a new viral video.

The altercation takes place outside a Trader Joe’s in Salem, Oregon, according to Twitter and Instagram user Fifty Shades of Whey (@davenewworld_). A two-and-a-half-minute excerpt of the eight-minute video has also gone viral on the r/publicfreakout subreddit, earning more than 23,000 likes at the time of this writing.

The video begins with a woman, who remains unseen but quickly exposes herself as a Karen, approaching the Trader Joe’s entrance. The manager intercepts them, and they exchange pleasantries.

There’s just one problem: These Karens can’t shop unless they mask up, which they have no intention of doing.

“We told everybody to maintain their distance, be polite and respectful, and respect other people’s rights,” a male Karen says. “We don’t want special treatment. We just want to be honored as shoppers.”

That’s a nice but ultimately untrue sentiment, as these Karens specifically want special treatment by being permitted to shop without masks.

As the Trader Joe’s employee continues to engage them politely, not passing judgment on their beliefs, it becomes clear he’s not going to let them pass.

“I don’t want to tell you guys what to think, what to do, what to believe, anything like that,” he says. “I would just ask kindly that you guys understand that here at TJ’s, we’re just trying to work, make a living. The difference you guys are trying to make isn’t gonna be made with us. It can be made with your government.”

It begins to dawn on the Karens that they’re not going to get their way, and they turn irate.

“I am not here to debate policy,” the manager tells them. “My responsibility as a manager of this store is to enforce the mandate, whether you guys believe in that mandate [or not].”

This back-and-forth continues for an excruciating eight minutes, as the Karens continue to insist they have a right to shop, and that Trader Joe’s has no legal grounds to enforce the mask mandate.

“You can’t enforce non-law,” Karen protests. “You cannot deny somebody the right to commerce.”

Karen nearly blows a gasket when she sees masked customers enter the store without problem.

“We just stand here until we get to shop, because that’s our goal here, is to shop,” Karen says.

“It’s not gonna happen, unfortunately,” the manager responds, never losing his composure. “I wish we could’ve come to some resolution.”

“You’re violating the laws of Oregon,” the would-be shoppers snap.

“However you feel,” the manager replies.

The coup de grâce comes when two Karens begin discussing their medical cards and their apparent coverage under the Americans with Disabilities Act.

“Everybody is considered disabled because this virus is being pinned on everyone, whether you have it or not,” the head Karen says. “So you are actually protected under the ADA because they assume you have the virus.”

Social media users dragged these Karens for perpetuating an insufferable sense of entitlement nearly one year into the pandemic.

“These people are the height of stupidity, Redditor r/CountChoculahh wrote. “‘You can’t enforce non law’ Yes they can, they’re a private business. They can refuse service to you.”

“I thought they were against the right to public commerce,” r/cantproveidid wrote. “Like they think refusing a wedding venue or cake to someone was ok by them.”

As @earthycrunchygrl put it: “I didn’t know that being a Karen or Kevin is protected under the Americans with Disabilities Act.”