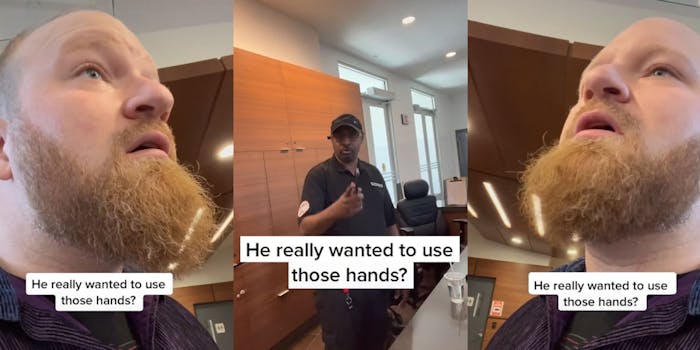 'You came in while I was urinating, and you accosted me.'

A man posted a video of security who he accused of accosting him in the bathroom after failing to understand Tourette Syndrome.

On May 17, @myfamily_withtourettes posted a video featuring the aftermath of his initial encounter with the security guard.

The video has received over 2.6 million views. “Security came into the bathroom after me – interrupted me midstream. And then addressed me in the foyer, until this conversation happened,” the TikToker said in the caption.

The TikToker’s unwanted sounds continue throughout his conversation with the security guard.

“You came in while I was urinating, and you accosted me,” the TikToker says.

The security guard, the TikToker implies, offered to “help” him “pee.”

The security guard then says he’s going to call the police, and the TikToker urges him to.

“You came in the bathroom after me. I’m trying to come help you,” he says.

The security guard seems to say he has “a right” to do so since he heard a noise.

The TikToker notes he had been at the establishment for 20 minutes but didn’t have any problems until her went to the restroom.

The security guard accuses the TikToker of giving him a hard time.

Security came into the bathroom after me – interrupted me midstream. And then addressed me in the foyer, until this conversation happened.

Some who are personally impacted by the disorder chimed in in the comments section.

“My son has Tourette’s and this scares me when he grows up and starts going out alone,” one said.

Another pointed to the TikToker’s apparent self-restraint.

“I don’t see how you didn’t get mad though, so frustrating trying to talk to someone like him,” they said, to which the TikToker replied: “I was very angry and frustrated.”

Viewers also noted how people with Tourettes and other disabilities should be protected, not disenfranchised. “THE FACT THAT PEOPLE STILL DONT UNDERSTAND TOURETTES LIKE ITS 2022,” one said.

“He said you were giving him a hard time?! If ur a security guard, police officer, etc u need to not only protect us but need to be good rolemodel,” another wrote.

It’s unclear where the incident took place. While one commenter urged the TikToker to “drop the name of the business,” the TikToker seemingly refused to do so, simply writing “It’s…” in response.

The Daily Dot reached out to @myfamily_withtourettes via TikTok comment.