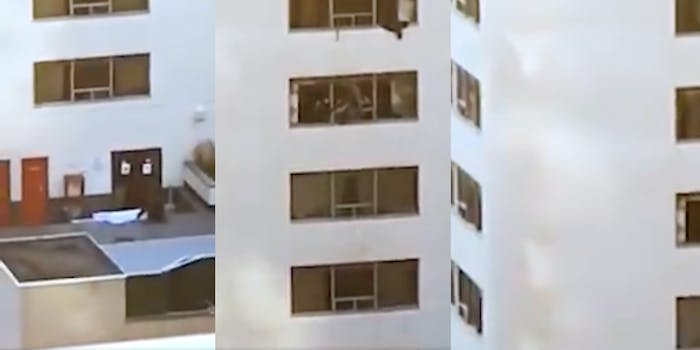 ‘This video is SO inappropriate to be sharing’: Police share video of man’s apparent suicide attempt, dividing viewers

Footage shows the man dangling from an 8th floor window.

A Toronto police chief who sung the praises of his officers saving a man from allegedly attempting suicide is facing backlash for posting the video to social media.

Chief James Ramer wrote on Thursday that police “attended to a Person in Crisis, a man hanging out of an 8th floor window” at the Roehampton Hotel, which has been a shelter for unhoused people during the pandemic.

The two-minute video shows multiple officers clinging to the man until people on the floor below were able to pull him in through that window. According to Ramer, the officers held the man up for 12 minutes before the rescue was finished, and he was transported to the hospital “to get the help he needs.”

While Twitter heaped praise on the officers and onsite security who were able to save this man’s life, Ramer’s decision to post footage of what appears to have been a mental health crisis was more divisive.

“If someone I loved was in the depth of crisis, the last thing I’d want is for anyone to share incident footage, or boast about the support they provided, on social media,” wrote Toronto City Councillor Josh Matlow.

However, others pointed out that the video was circulating online prior to Ramer sharing it on his own feed.

“It was committed in a public space, which if ended poorly would be traumatizing for the thousands of people with a view of it,” one Twitter user said. “We need to see mental health crisis and addiction in order to find a solution.”

This singular incident is part of a larger conversation that’s been brewing regarding what kind of real-world content gets shared and goes viral on social media, and at what point that crosses a line.

Just in April, an upset customer filmed a motel employee having a mental crisis in a video that went viral and resulted in the employee quitting his job and talking about being suicidal on Reddit due to the harassment and unwanted attention the video brought.

Of course, once something is on the internet, it’s out there forever. But whether institutions and community leaders should abide by a higher, more thoughtful standard remains an ongoing conversation.

“Just because members of the public are circulating the video doesn’t excuse the police posting it,” one person commented regarding the Toronto clip. “Other people doing something inappropriate doesn’t mean the police shouldn’t also be held accountable.”