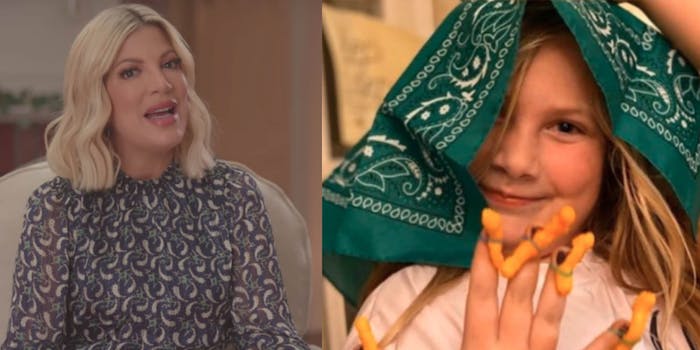 'Racism takes no days off, even during a pandemic.'

Parents across the world are stuck in their houses because of the coronavirus (COVID-19) pandemic.

Families are undoubtedly doing anything to keep kids busy: Binging on Netflix specials, busting out coloring books, and even following online learning classes.

Tori Spelling, however, decided to play a game with her daughter that has many online enraged. She decided to dress her daughter up as a racist stereotype and broadcast it on her Instagram Story, stirring backlash.

“Days kept inside we have to get creative… Hattie has become McQuisha in her Cheeto extension nails!” the actress captioned the photo.

Comments immediately poured in, calling the post both racist and insensitive.

People were especially angry that even in the midst of a pandemic, the actress still had time to be racist.

“Racism takes no days off even during a pandemic @torispelling why did you think this was ok ?!?!?! Let me guess ‘ignorance and you’re so so sorry.’” Twitter user @TabieGermain wrote, along with a screenshot of the post.

Others came down on Spelling for apparently using her daughter’s time off of school to teach stereotypes.

In response to the backlash, Spelling shared an apology, saying that she didn’t intend to offend anyone. She also claimed that the inspiration for dressing up as “McQuisha” came from her daughter’s love of Shanaynay, a character on the hit ’90s show Martin.

“She is innocent and didn’t mean anything by it. I should have thought about how it could have been perceived and misconstrued before I posted. I did not. I’m truly sorry,” the actress wrote in the apology.