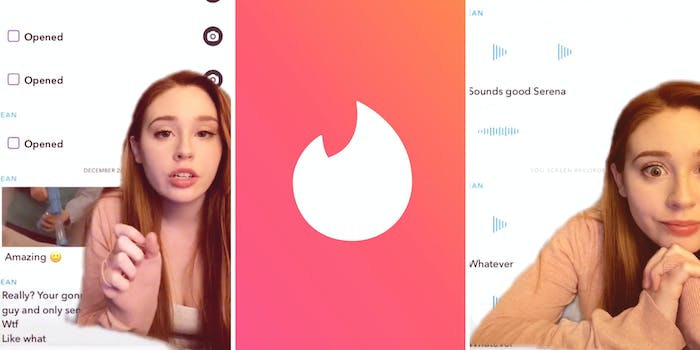 A TikToker exposed a Tinder match who went off on her and sent several harassing voice memos.

@serena._rose is a TikTok content creator with over 56,800 followers. Her video showing an unhinged Tinder match who sent her seven straight voice messages in a row after she declined to respond to him got over 245,200 views and 42,100 likes since posting six days ago.

“I matched with this guy on Tinder 6 months ago,” @serena._rose said in her video. “He sent me one picture and I sent one back.”

She also played his voice messages. Viewers can also see receipts of the one-sided conversation on-screen.

“What’s your response to that, I literally sent you a picture of me vaping and you sent me a duck face,” said the man, Sean, in a voice message.

After receiving no response, he continued to send infuriated voice messages: “Exactly you don’t have a response to that, that’s what I thought. I’m a kind, compassionate, genuine guy that wanted to take you out for dinner and drinks and get to know you but no. Maybe it’s cause I’m vegan and I genuinely care about animals and stuff.”

As the barrage of messages continued (with no response), he got more angry.

He then proceeded to reference the curtains in her front window, which she assumes that he got from a photo of her company ID card.

“He’s threatening to know where I live and where I work,” said @serena._rose.

In a follow-up video, @serena._rose clarified that the man started sending her these messages when he saw a photo of her going out to drinks with her friend on her Snapchat story.

“He felt so entitled to me and my time,” said @serena._rose.

Online sexual harassment through dating apps is a major issue for women, and many women feel threatened by male stalkers who can find out where they live and work.

Most of the 1,585 comments offered support and sympathy.

“Dear diary, I was rejected again today. I don’t get it. I even sent her a badass pic of me vaping. Maybe I’m just too kind and caring…,” said @dance4bees.

Daily Dot reached out to @serena._rose for comment via TikTok message.