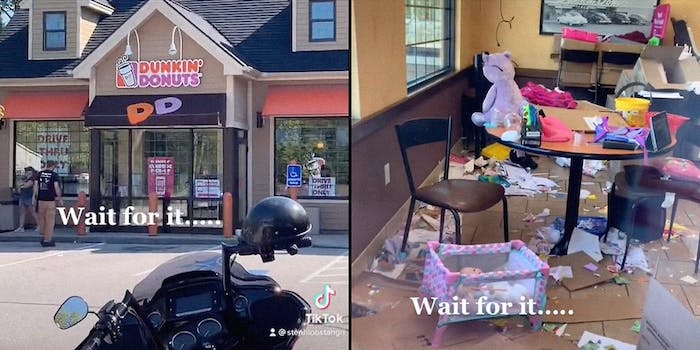 The viral TikTok video started a conversation on affordable housing and livable wages.

A TikToker was accused of “snitching” by posting a viral video of a messy Dunkin’ location in New Hampshire. Social media users are suspecting that there is a worker at the location in a housing crisis or unable to afford daycare for their child while they work.

The video was posted by @stephlobstahgrl and has been viewed 739,000 times. According to the TikToker, customers were asked to wait outside or order online and pick up their order at the window, but a quick look inside the store showed a sprawling mess in the dining area. It appears as if the Dunkin’ was being occupied beyond its intended business.

“We stopped to get coffee at Dunkin’,” says the robotic voiceover. “You had to wait in the line outside, or order online, and go to the door and pick up.”

After a quick cut, the TikToker is at the window. “This is the mess you see when you pick up your order. What is going on here? Gross,” the voiceover continues.

There is stuff and trash strewn everywhere, and the location appears unclean. Items for a child, like toys, can also be seen.

Dunkin’ responded to the TikToker’s video, saying, “Thank you for flagging this to us. We have identified the location and elevated directly to the franchise owner.”

Some are accusing @stephlobstahgrl of essentially outing a Dunkin’ employee who might be unhoused or in a housing crisis. The viral TikTok eventually started a conversation on affordable housing and livable wages. Some are empathizing with the worker, or workers, and others are questioning the condition of the store.

“What’s wrong with y’all? This person is obviously in a housing crisis and is doing their best to survive. Now you took their job away from them,” one said.

“Nooo, don’t be a snitch; it’s clearly someone TRYING,” a third wrote.

Some said that while they empathize with the worker, they still don’t think the conditions are excusable.

“Y’all talking about how daycare isn’t affordable as if this is SAFE,” said a detractor. “A child shouldn’t be left alone in that while the parent is BUSY WORKING.”

Another said they are “all for taking babies to work, but those conditions are not for a child.”

The sheer notion that a parent could be financially forced into occupying a Dunkin’ left many sorrowful, however. One replied, “This breaks my heart. Imagine the parent having no choice but to bring their child there.”

The Daily Dot has reached out to Dunkin’ and @stephlobstahgrl.