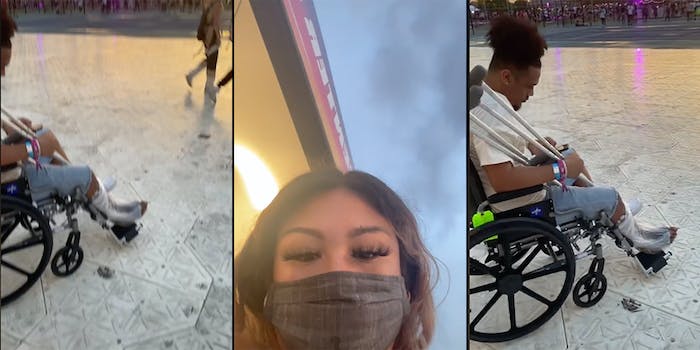 'They kept saying people would be around to help.'

The Rolling Loud music festival, held this past weekend in Miami, received rave reviews for its performances from the likes of Travis Scott, Megan Thee Stallion, A$AP Rocky, and Young Thug. But one TikToker new to the platform is contending that the festival wasn’t accessible for people with disabilities, and her video highlighting a fan in a wheelchair far from the action is going viral as a result.

The video is the first to go up on the @clawdbycaroline account, and had garnered more than 679,000 views as of Monday evening. It shows what is presumably the creator staring at the video camera wearing a mask, and then pans to her companion in a wheelchair, who appears to have a cast on his foot.

While it’s not entirely clear given the angle at which the video’s filmed, discussion in the comments centered around the appearance that the platform they were on had steps but not a ramp leading down it to one of the festival attractions.

The TikToker captioned the video, “Paid so much money for this place to not be ADA accessible,” and used both the #disabilityawareness and #americandisabilityact hashtags as well as hashtags for the festival.

The festival, held on the grounds of Hard Rock Stadium in Miami Gardens, Florida, featured four outdoor stages positioned outside the actual stadium. The official Rolling Loud website includes a page on accessibility asserting, “Rolling Loud is a fully accessible event, and we are dedicated to continually improving our efforts to ensure you have access to all the festival amenities.”

The page also noted that an Access Center would be established at the festival for people needing accommodations to receive an ADA wristband credential and have questions answered. It also noted, “One companion wristband will be issued for each disabled patron,” with exceptions made for families with young children.

The TikToker felt the video was self-explanatory, remarking in the comments, “Do you really need a part 2 to understand?” and then regarding her companion, “It’s not about just him. What [about] others who live like this daily?”

While a number of people in the comments expressed solidarity with the creator and expressed empathy regarding their festival experience, others found fault with her allegations.

“There was a whole section closer to the stage meant for this,” one commenter said, presumably referring to an ADA-designated area near a performance stage, “but go off.”

The TikToker replied, “We had VIP tickets. VIP didn’t have accessibility,” going on to assert that “they”—presumably, a festival organizer—”kept saying people would be around to help.”

In response to another commenter laughing and observing, “U guys are weird thinking u can sue for this,” the TikToker remarked, “I hope nothing ever happens to you that you have to rely on ADA access.”

A number of people took skepticism about her video to equal ableism. As one person flatly assessed, “This comment section is ableist.”

The Daily Dot has reached out to the TikToker and the festival for comment.