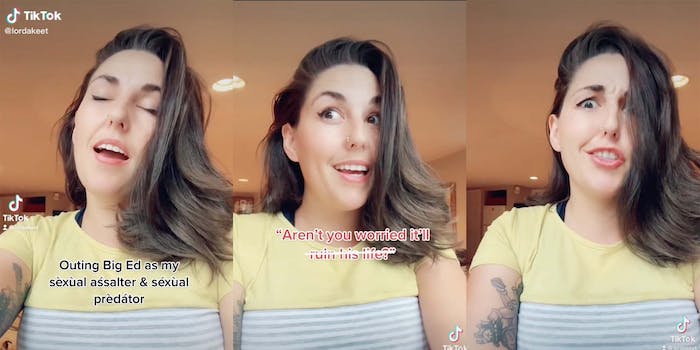 In a TikTok posted on July 8, Lorelei Clemens (@lordakeet on TikTok) alleged that Ed Brown, aka Big Ed of TLC’s 90 Day Fiancé, sexually assaulted her.

In May 2020, Clemens first went public with accusations that Brown sexually harassed her. She says, however, that TikTok removed the video showing her initial allegation.

Clemens’ latest video is set to a TikTok trend involving Bo Burnham’s song “All Eyes On Me,” featured in his latest comedy special, Inside. In response to whether or not she’s worried that outing Big Ed as her abuser will ruin his life, Clemens lip-syncs to Burnham’s lyric, “Like I give a shit?”

Burnham’s Inside has inspired many TikTok trends, including one that features altered laughter from Burnham’s song “Welcome to the Internet.”

Clemens used the trend in a follow-up video, wherein she says that “trolls and victim shamers” on are severely impacting her mental health. She elaborates by saying she is struggling with flashbacks, depression, anxiety, and substance abuse, among other things.

Screenrant reported that after Clemens’ allegations, fans of 90 Day Fiancé wanted Brown to be removed from the show and hoped that TLC would make a statement about the allegations.

The Daily Dot has reached out to Clemens and Brown.