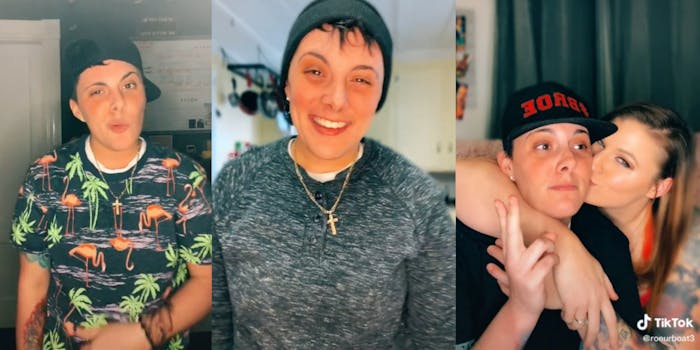 Rochelle Hager's fiancée confirmed the news in a tribute post on TikTok.

Popular TikToker Rochelle Hager died at age 31 on Monday, her fiancée confirmed on the platform.

Hager, who was known as @roeurboat3 or Roe by fans, died in what is being called a freak car accident. Hager was in her car when a strong windstorm reportedly caused a tree branch to fall on it in Maine, where she lived. Hager died at the scene, according to HITC.

“She was driving, and we were having a windstorm, and a tree fell on her car. She wasn’t in pain. She died instantly,” Hager’s partner, Brittanie Lynn, says in her most recent TikTok video, posted on Tuesday.

According to Distracitfy, Hager had about 100,000 followers when she died. The TikToker was reportedly known for posting duets, videos with Brittanie and Brittanie’s son, as well as LGBTQ+ content. Her fans were reportedly so invested in Brittanie and Hager’s relationship that the couple became known as “Broe” to them. The couple even sold merchandise emblazoned with their portmanteau name. Brittanie confirmed the news on Monday in a tribute post to Hager, whom she got engaged to in December of 2020.

“I lost the love of my life today. Thank you for being my everything and thank you, everyone, for your support. Rest easy my love,” she wrote to accompany photos of the two of them together. “Thank you for showing me what true love is. I love you forever.”

In a later TikTok video, Brittanie, who has nearly 300,000 followers on her own TikTok account, added, “Who knew forever would end so soon. How do I live without you in my life?”

In another video, Brittanie visits the scene of the accident and shows fans the memorial she made for Hager.

Fans are expressing their condolences in the comments section of Brittanie’s videos. “You two were my favorite TikTok couple. I’m so sorry for what happened. Roe will forever be with you,” one said.

“You were relationship goals. I’ve said it before. The love you had for each other radiated of you all the time. Sending love and prayers,” another wrote.

Fans are also rewatching some of Hager’s old videos. “I’ve never been more sad (over) a strangers death,” one fan commented on a video of Hager’s that was posted earlier in March.

In her latest video, Brittanie thanks fans for their “overwhelming support.”

“I appreciate every single one of you, and Roe loved our TikTok fam,” Brittanie says in the video.