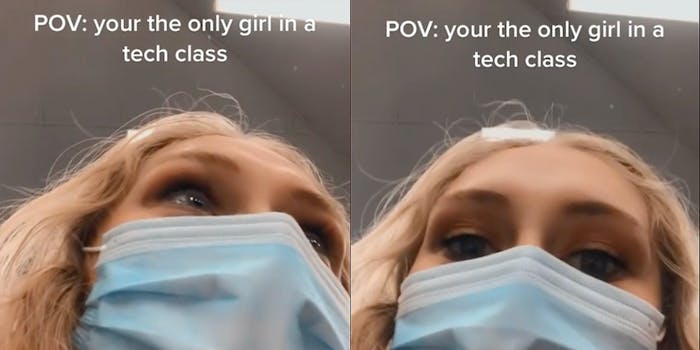 'If they’re knocked out, it’s consent?'

Kristen (@tank_on_e) recorded her classmates’ concerning comments and uploaded the video to TikTok on Wednesday with the caption, “POV: your [sic] the only girl in a tech class.”

The guys are in the middle of cracking jokes about having sex with a woman when the video start. While it takes a few seconds to make sense of any of it, the intent becomes clear pretty quickly.

“Or you could just find one that doesn’t talk, and when you ask them for consent, it means yes anytime,” one guy says off-camera.

“Are you saying silence is consent?” another asks for clarification. “If they’re knocked out, it’s consent?”

The original guy’s response is unintelligible, but everyone else in the room —all guys, by the sound of it and Kirsten’s own comment—is laughing as Kirsten just stares.

“Just so you know every single one of us in this room is going to hell. Even just laughing at this shit, we’re going to hell,” someone says, but his tone remains playful. The others keep laughing.

Although the video was short, and Kirsten provided no further context, it left viewers horrified if unsurprised.

“This is what we mean by all men,” wrote @rayaneashtar. “When they’re left alone, they ALLOW misogyny to thrive.”

After the video was shared to Reddit, women commenters shared that they have had similar experiences in classes predominantly filled with boys or men—engineering, game art, and computer science were all listed as examples. Some said the behavior led to them dropping out or switching majors entirely.

“I started college in pursuit of a [computer] degree but quickly abandoned that idea when it became obvious how miserable I’d be as a woman in the field for the rest of my life,” u/LVII admitted. “I do not have the ability to shrug that shit off.”

The overall sentiment in the comments on both TikTok and Reddit was that the type of behavior sends a red flag to women while men insist their comments nothing more than harmless jokes.

“If they’re comfortable talking like this in public, imagine what they’re like in private,” one Redditor wrote.