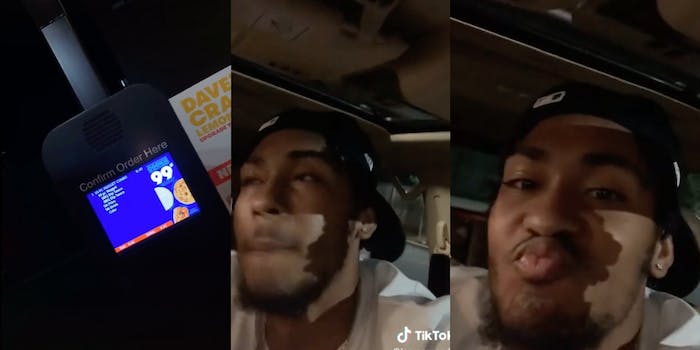 ‘Y’all really thought the people were gonna be on your side?’: TikToker slammed for filming confrontation with Wendy’s worker in drive-thru

'People harass customer service workers like it's funny then turn on the camera to film people's reactions when they've finally had enough.'

A TikToker’s video featuring an employee working the Wendy’s drive-thru did not get the response he might have wanted, with many viewers siding with the worker.

It’s not clear what was said previous to the start of the video, but it begins with TikToker @lotp_von saying, “(You’re) mad because you hate your job,” before proceeding to order an item off the menu. “Anyways, can I get aa number 10?”

The poster claims the worker taking his order via the drive-thru got “disrespectful” when his girlfriend, the driver of the car, was deliberating what drink to order.

The TikToker and his girlfriend can be heard snickering. The worker repeatedly says “no” when he asks for a number 10. “Y’all don’t got that?” the TikToker questions while his girlfriend says, “It’s on the menu.” The employee goes silent, while the TikToker calls her by a name, “Sharkeisha”—presumably one that isn’t hers.

They then pull up to the drive-thru window to hash it out with the worker. There, they begin arguing with the employee as she tries to deescalate the situation.

The video has gotten 180,000 views on the platform, with many commenters defending the Wendy’s employee.

“Y’all really thought the ppl were gonna be on your side nah we with the worker they don’t get paid enough to deal with y’all bs,” @puggsnotdrugs wrote.

Another commenter pointed out the unfair nature of only filming part of the interaction. “People harass customer service workers like it’s funny then turn on the camera to film people’s reactions when they’ve finally had enough,” @abigailkaitlin wrote.

Another implied that they work in customer service and that people like the TikToker make people in the industry “hate (their) job.”

The Daily Dot has reached out to both @lotp_von and Wendy’s regarding the video.