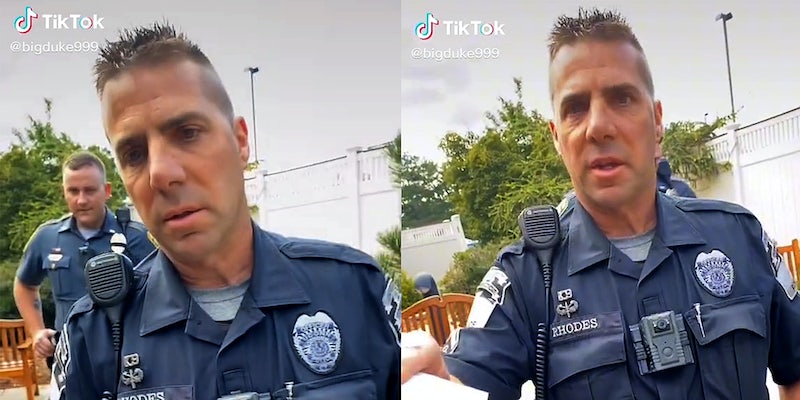 ‘Calling you a p*ssy is a public disturbance?’: TikToker ticketed for name-calling cop in viral video

The copy insists it fits the bill.

An apparent college student who confronted a police officer who gave him a ticket over name-calling is being applauded online, and sparking a debate for, for not backing down.

Video shared to TikTok picks up after an officer with the name Rhodes on his badge has already approached the student in question and is handing over a ticket. The student asks what he’s being ticketed for, and Rhodes tells him it’s for “creating a public disturbance.”

“OK, cool,” he replies. “So calling you a pussy is a public disturbance?”

The cop insists that doing so “in front of a few hundred people” fits the bill.

“No. I don’t think so. Don’t worry, we’ll be contesting this one,” the student tells him. And that’s when he decides to go ahead and double down: “Why are you that butthurt that you couldn’t just give it to me yesterday?”

“‘Cause I didn’t feel like dealing with the situation yesterday,” the cop replies.

“Oh, yeah, exactly. Because you don’t have balls,” the student fires back. “You don’t.”

He also accuses him of having a “big fucking ego” and suggests that the officer will likely harass him on campus moving forward if he can’t handle an insult without taking punitive measures.

“You’re such an actual pussy, it’s so funny. That’s so fucking funny that you wrote this out,” the student says. “How does this make you feel? Does it make you feel good?”

And, Rhodes admits, “It does.”

Viewers were highly amused by the student’s gall in pushing the officer’s apparently easily pushed buttons.

“Just admitted he wrote him a ticket for getting embarrassed in public,” wrote @vortexxr.

“u actually hurt his feelings so bad lmao,” @gbake27 added.

But the underlying situation didn’t sit well with people, particularly in light of the ongoing accusations that police across the United States are on a power trip that can and does result in a lot worse than just a ticket.

“Fundamental misunderstanding of public disturbance,” one user wrote. “Officer is totally in the wrong.”

“What happened to freedom of speech?” asked another.

It’s unclear when or where the video was filmed, and it’s the only TikTok video uploaded by @bigduke999. But in the comments, he maintains it’s him in the clip and that while he was not acting “nice,” his desire for “freedom of speech” trumped decorum during his confrontation.