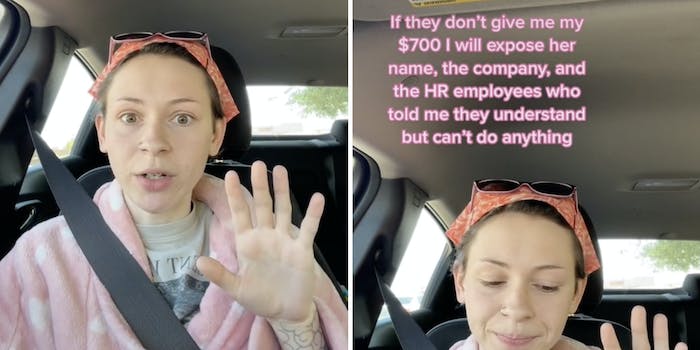 ‘Put a finger down if you got fired after blatant medical discrimination’: TikToker says they were fired because of their chronic health condition

A worker in Arizona says their company fired them after they requested time-off and accommodations for a chronic migraine condition and pre-diabetes in a now-viral TikTok.

In the video posted by TikToker Jamie (@chithead.orphan) on Friday, they explain the events that led to their firing using the “put a finger down” TikTok trend.

“Put a finger down if you got fired after blatant medical discrimination and your new manager was literally making fun of the fact that she terminated a girl with seizures,” Jamie says in the clip.

I’m literally fuming right now. I got off the phone with HR and she was like “what is it you want from us” gimme my $700 and I won’t report you to the EEOC or Sue you guys howbowdah like I ASKED when I called😊 they gonna lmk, I’ll let y’all know

Jamie continues that they took off one day of work to recover from a migraine, explaining to their boss that this was part of their chronic health condition. They say that their boss approved the time off and asked for a doctor’s note, which is not required in Arizona.

“I’m not letting my insurance pay $85 for a piece of paper,” Jamie says in the video.

The creator explains that they went back to work the next day but experienced low blood sugar, a symptom of their pre-diabetes, and asked to take lunch 19 minutes early. After coming back from lunch, they say they were fired.

Text overlay on the video reads, “If they don’t give me my $700 I will expose her name, the company, and the HR employees who told me they understand but can’t do anything.”

The video is captioned: “I’m literally fuming right now. I got off the phone with HR and she was like “what is it you want from us” gimme my $700 and I won’t report you to the EEOC or Sue you guys howbowdah like I ASKED when I called they gonna lmk, I’ll let y’all know.”

The video has amassed over 140,000 views as of publishing, with several users sharing their own experiences of medical discrimination at their own workplaces.

“I got fired for being hospitalized for the miscarriage I was having while at work,” one commenter wrote. “My boss literally said, ‘Do you even know what a miscarriage is?'”

“I got fired for having chronic migraines and my boss knew before she hired me but had the audacity to say she didn’t think they would affect my work,” another said.

“I got fired from a receptionist job at a groomers because I had a stroke and she knew I needed to have surgery and didn’t want to deal with it,” a third added.

Arizona is an at-will employment state, which means that employers are legally allowed to fire an employee. However, employees with disabilities are still protected under the Americans with Disabilities Act (ADA). In a response video, Jamie shows a scanned copy of the Voluntary Self-Identification of Disability form that they submitted to their former employer during the hiring process to prove that their former employer was aware of their condition.

Jamie later clarified in a comment that they will “not be personally exposing” their former employer.

“I did request my final $700 as part of 1 month salary or I will pursue legal action for medical discrimination,” Jamie commented. “The company has already been reported to the attorney general for disability discrimination.”

The Daily Dot reached out to Jamie via TikTok comment.