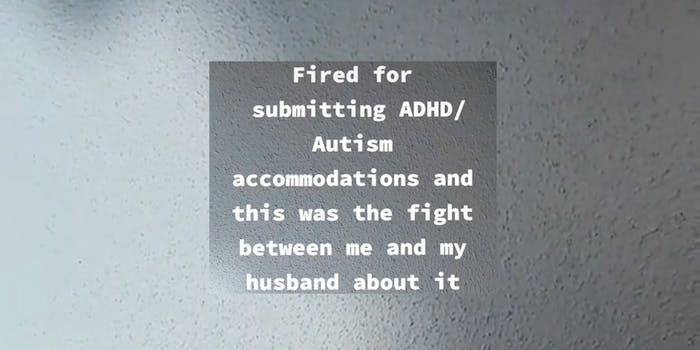 Viewers say she deserves a better job and a better husband.

A woman on TikTok says she was fired from her job after requesting accommodations for her ADHD and autism, and her husband called her “incompetent.”

Abby, known as @disabledanddivorced on TikTok, shared recordings of her husband verbally abusing her over the situation in a series of three TikToks.

“My husband says I sabotaged myself because he doesn’t understand,” Abby wrote in the caption of the first TikTok.

After her husband, who she appears to have divorced, called her “incompetent,” Abby snapped back, “Yeah, it’s like I’m autistic.”

“You’re incompetent about everything other than doing work,” her husband said. “But you can’t just put your head down and fucking do.”

Viewers were saddened by Abby’s husband, but reassured Abby she shouldn’t stay with someone who treats her that way.

“He actually thinks you’re incompetent and he still would think that if you got fired or not,” one viewer commented. “You shouldn’t be with someone who views you like that.”

Another TikToker said, “People that don’t have ADHD/ASD don’t have a clue how difficult it is. They think we don’t care when in reality all we do is obsessively care.”

Abby’s second TikTok shows Abby standing up for herself, saying, “I’m not being fired because I’m incompetent.” But her husband still insisted that was the reason.

A third TikTok shows Abby calling her husband out for always telling her to lower her standards, because her husband says he can’t be the person she needs him to be. In a possibly mocking voice, her husband replied that she was “pushing everyone away” because of her standards.

“That’s fine. I’m not going to do that—that’s absurd for you to ask,” Abby said. “If you can’t live up to my standards then you don’t get to be in my life.”

Several viewers applauded Abby for not backing down, saying she deserved happiness on her own standards. Others said her husband didn’t seem to understand boundaries or respect.

“It sounds more like he doesn’t respect your boundaries,” one viewer commented.

Another wrote, “Emotional manipulation at its finest.”

Most viewers could agree that Abby deserves a better job and a better husband, but some also said she should sue her employer for not accommodating her disabilities. If Abby was fired solely for requesting disability accommodations, she may be able to file a lawsuit.

Private employers, state and local governments, employment agencies, labor organizations and labor-management committees are all included in the ADA regulations, according to the U.S. Equal Employment Commission.

It is unclear who Abby’s employer was, and Abby did not immediately respond to the Daily Dot’s request for comment.