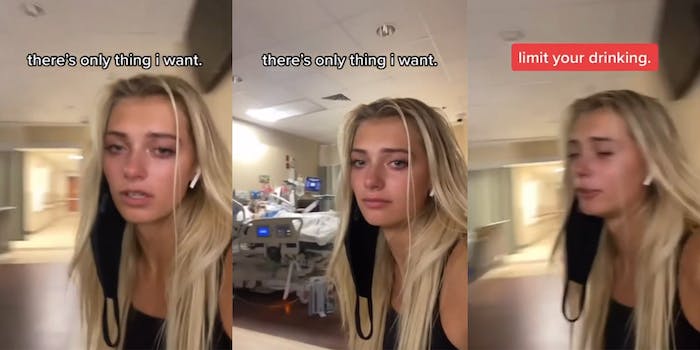 ‘Literally using their dying friend for clout’: TikToker flamed for filming apparent loved one in hospital with warning to ‘limit your drinking’

The TikToker pans over to someone in a hospital bed and shows herself in distress, hand over her mouth.

A viral TikTok video getting roasted on Reddit shows a young woman appearing to send a message of caution. But many are accusing the TikToker of using her apparent ill or dying loved one for clout.

The eight-second video was posted to Reddit’s r/iamatotalpeiceofshit by u/AlreadyReddit999 but had no identifying features. The young woman is unknown. In the clip, the TikToker pans over to someone in a hospital bed and shows herself in distress, hand over her mouth. She warns viewers to “limit your drinking.”

The caption on the Reddit post accuses the TikToker of “Literally using their dying friend for clout.” However, it’s also unclear what relation the patient has to the TikToker.

Now, this could’ve been a genuine PSA for the consequences of drinking too much. However, many commenters don’t believe she made the video for any reason other than social media clout. Even without any identifying markers, it’s also not entirely certain she even knew the person in the hospital bed.

“I guarantee she did multiple takes,” assumed u/WellNowWhat6245.

“There’s no way that was her first take,” another said.

Others made similar assumptions, with redditor u/CoachMikeHawk saying: “Right after she was done tearing up she was like ‘hmm what music would go good with this.'”

The TikToker used sound from a Death Note scene in her video. She timed the sound to match her overlaid messages and was accused by viewers of doing the same with her movements. “There’s only one thing I want” and “Limit your drinking,” the messages read.

“Here I was about to comment that maybe she was really trying to send a message and we should leave her alone… Yeah, f her,” one wrote, to which another said in response: “Nah. She was moving her hands and mouth to that song. So she pretty much knew what music would go good with this.”