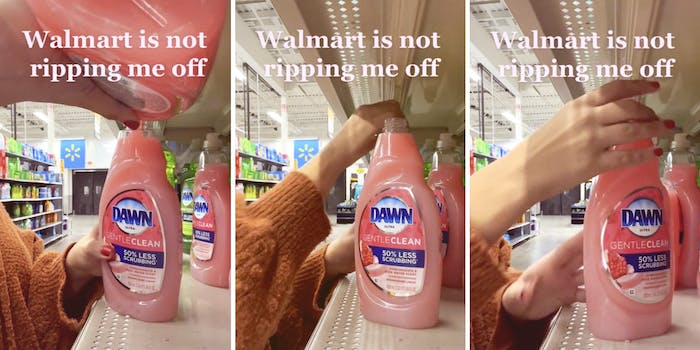 ‘Walmart is not ripping me off’: TikToker fills Dawn dish soap up by taking from another bottle at Walmart, sparking debate

'Now you just ripped someone off lmao.'

In a viral TikTok video, a customer pours Dawn dish soap from one bottle to another to fill it up inside a Walmart.

“Walmart is not ripping me off,” user @chemical.xxx wrote via text overlay on the TikTok.

The video shows the user filling the small space left at the top of the container with dish soap from another bottle. It received over 13.7 million views and sparked debate among thousands of commenters.

Several users pointed out that customers pay for a particular volume of a product that is listed on the package. They noted that the space left at the top of the bottle is for safety purposes.

“You’re not getting ripped off, you are paying for a volume. There’s a space left in most things to avoid leaking or popping in transport,” one user said.

“They literally wrote the amount of the liquid in the container, you’re not getting ripped [off],” another said.

“Chemical safety is that there must be space in the container incase of a reaction to surrounding temps. [That] is for everyone[‘s] safety,” a third said.

One user called it the “Most petty thing I’ve seen in my life.” Others claimed that the TikToker was wasting the now half-empty bottle they used to fill their own.

“Now you just ripped someone off lmao,” one user said.

“[At this point] [you] might as well steal the second bottle cuz they can’t use it no more,” another wrote.

Some users simply showed their frustration with the TikToker’s actions.

“Girl this is why everything is locked lmao,” another claimed.

One user pointed out that the TikToker could face legal action under the Federal Anti-Tampering Act. “Did you know that product tampering is a felony?” they said.

On the other hand, some users defended the TikToker against other commenters’ criticisms.

“Y’all gonna lose it when you hear i put more strawberries into the container that I buy,” another said.

However, one user questioned why the TikToker poured off-brand dish soap into a Dawn container, and the TikToker revealed that someone had done this before them. They insinuated that it was a joke.

“Because it was already half empty, someone already did it before me and I thought ‘that’s hilarious I’m going to do that [to] post this on [TikTok],’” they responded.