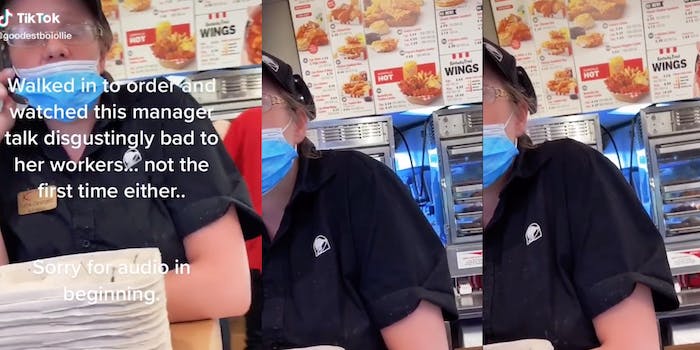 'You don't need to talk to these f*ckin' people like that. The job sucks as-is.'

A manger for a combination Kentucky Fried Chicken and Taco Bell was shamed for the way she allegedly speaks to employees in a viral video posted to TikTok.

The video garnered over 500,000 views since it was posted June 20 by @goodestbouollie.

“Walked in to order and watched this manager talk disgustingly bad to her workers… not the first time either,” @goodestboiollie wrote and said, using the text-to-speech effect.

It’s not clear what the manager allegedly said to her employees, but whatever it was, it was enough to provoke the man who filmed the video to call her out.

“You don’t need to talk to these fuckin’ people like that,” the TikToker can be heard saying. “I don’t care. They’re not paid enough money to deal with your shit. The job sucks as-is. You don’t get to make ’em hate being here. Just because you’re fucking miserable in your life, doesn’t mean you get to take it out on these guys.”

As he goes on speaking, the manager, who he identifies as “Katie,” appears to be on the verge of tears as her glasses fog up.

“You remember that,” he says. “The world’s gonna be a better place, and it’s gonna start somewhere. You gotta make this place a better place. You don’t get to talk to fuckin’ people like that, all right? I’ve been here many times, Katie, and I’ve seen how you talk to people, many times. Not everybody’s gonna just laugh it off and take it, right. And you know damn well shit goes viral real quick, don’t you Katie? You don’t talk to people like that, all right? You treat these people the way you would want to be treated if you were in their (position).”

At the end of the Tikoker’s speech, he walks away. As he is walking away, someone can be heard thanking him. It is unclear whether the “thank you” comes from the manager, as she is wearing a mask.

An update provided by the TikToker claimed that the manager has since been fired.

Many viewers expressed appreciation for both the TikToker and what he did.

“I felt like Katie actually listened to you,” one of the viewers, @702turtle, wrote. “Thank you for standing up for them.”

The Daily Dot has reached out to Taco Bell.