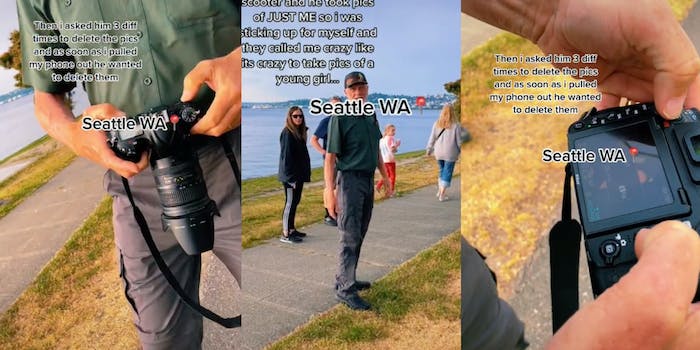 ‘This old man is a creep’: TikToker confronts man for taking photos of her—but people are rushing to his defense

'We’ll vouch for him,' one bystander tells her in the video.

A TikToker confronted a man who was taking photos of her in the street in Seattle. But unlike in previous instances, in which girls are lauded for sternly confronting alleged creeps in viral videos, people—in both online and IRL—don’t seem to be taking her side.

In the video, which has been viewed over 57,000 times since being posted on Sunday, a TikToker named Natalie can be heard confronting a male senior citizen who is holding what appears to be a professional camera.

“This man is taking pictures of me!” she shouts.

Bystanders can be heard rushing to defend the man.

“Call the cops then because they’ll say when you’re in a public area you can take—” a woman starts to say.

“Not when you’re aiming the camera at someone,” Natalie says, cutting the woman off.

A man then jumps in to say: “We’ll vouch for him.”

The photographer walks over to Natalie and deletes the photos in front of her. “You’re getting a little bit hysterical here,” he says while deleting them.

She said she started recording “to spread awareness about the situation” and show “that people can stick up for themselves when they are put in uncomfortable situations.”

“This old man is a creep,” the text on the video reads. “[I] was just riding a lime scooter and he took pics of JUST ME so I was sticking up for myself and they called me crazy like [it’s] crazy to take pics of a young girl… He had 5 pics of my whole body then zoomed in on my face.”

The video was posted to the @bestofwashington TikTok account, a popular account run by a collective of Washington State-based TikTokers who, Natalie said, post “cool places to visit, cool food places, and some stereotypical comedy.”

According to PetaPixel, the video was met with backlash.

While the video has since had its comments turned off, screenshots taken by Bellingham Metro News show that viewers likewise defended the man.

One viewer who claimed to know the man said he is “very sweet” and “takes pictures randomly,” according to one screenshot.

“I take photos of random people all the time. He’s just trying to be artsy.. I’m sure it was innocent,” another wrote.

Viewers went as far as to call the TikToker a “Karen.”

“I think he a professional photographer Karen you over reacted,” one said.

“He has a very expensive professional camera so I assume he does go around taking pics of everything. Calm down Karen,” another said.

Natalie told the Daily Dot she wasn’t surprised with the reactions the video received because TikTok can be a “toxic place.” “I just ignore the hate and keep doing what makes me happy,” she said.

Natalie added that she turned the comments off because she doesn’t “really care what strangers have to say about the situation because they were not there and they did not see what happened.”

The TikTok account later gave an “explanation” of the incident in a followup video.

“This guy was taking pictures of Seattle, and, turned out, he ended up taking some closeup pictures of Natalie—which isn’t illegal. … But if someone asks you to delete the pictures, you should at least be a decent person and just delete them,” another TikToker named Emil says on behalf of Natalie.

Emil says the man failed to give Natalie proof that he was a legit photographer.

Natalie told the Daily Dot “it would have made (her) feel a little bit better” if he showed her business card or website to prove he was a real photographer. “You never know that man could’ve been lying to me and just said that he was a street photographer when he wasn’t,” she said.

“Either way I think it’s important to ask people to take photos of just them I would have (understood) if I was just in a background of a photo I would not mind at all but the fact that the photos were just of me is creepy to me. He is a stranger you never know (strangers’) intentions there is a lot of scary creepy people out there,” she added.