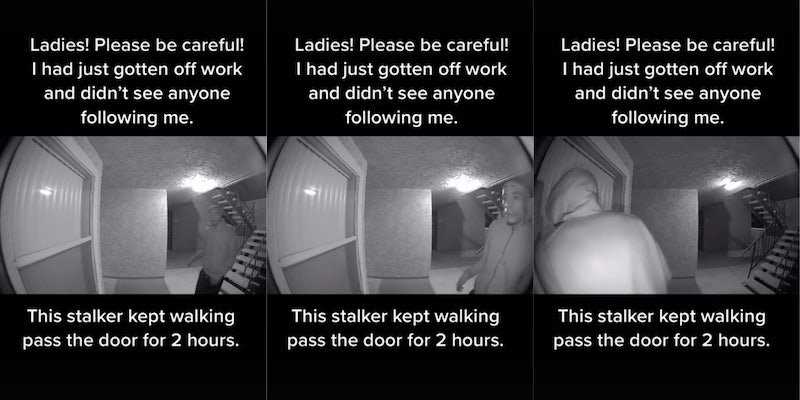 'If you didn't have a camera, you would have never known.'

A TikTok video features disturbing security camera footage of a woman’s apartment being cased by an alleged stalker for roughly two hours.

The video, posted by @heyitspheebs, has garnered over 10 million views since being posted on Friday. In the caption overlay, she wrote: “Ladies! Please be careful! I had just gotten off work and didn’t see anyone following me. The stalker kept walking [past] the door for 2 hours.”

She’s shown entering her apartment at 9:25pm. Once inside, the video features a man in a hoodie walking by just a few minutes later.

The alleged stalker comes back down the staircase, looking at the door, and it’s obvious he’s seen the security camera. He pulls over his hood, trying to cover his face as he cases out the woman’s apartment. He looks into the adjacent window.

She made a subsequent video detailing that she showed the footage to the apartment manager, and the response she received was less than satisfactory. She informed her followers that she’s now staying with a friend.

She also released additional security camera footage, showing the man continuing to walk by until her boyfriend shows up.

The man is shown walking by, thinking he’s ducking the camera, at 10:50pm, and then again just 10 minutes later.

In the comments, people expressed their hope for the TikToker’s safety and their assessments of what the man was going to do.

“He was gonna kick her door in,” said @anndbell. “He was trying to Het up the nerve. He didn’t know if her man was home or not. Girl, watch your back.”

Another said the “most terrifying part” was that the TikToker would’ve never known the man was stalking her apartment if it wasn’t for the camera.

“That looks much more serious than you think,” another said, adding, “stay safe.”