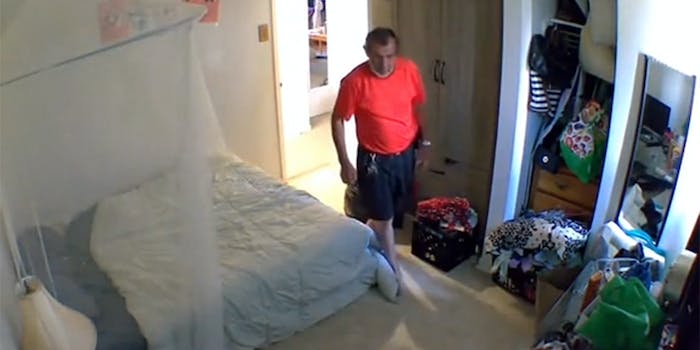 Video: Woman catches her landlord sneaking into her room, smelling her bedding while she’s away

He claimed he was looking for her cat.

Leaving your home unattended when you go out of town can be a little nerve-wracking no matter what your living situation is, but even more so if you realize your landlord has been sneaking in while you’re gone.

Tyisha Macleod made the unfortunate discovery thanks to some strategically placed cameras and awkward timing by a friend.

Macleod shared the footage to TikTok, where it racked up more than 4.4 million views. She noted in the caption that she’ll definitely be breaking her lease to move after this creepiness.

The first video was taken in her bedroom and shows a man she says is her landlord walking over to her bed, picking up her pillow, and giving it a good, long sniff.

He arranges it back the way he found it, takes a peek under the sheets, and goes back to the living room.

The second video features footage from the living room camera and shows Macleod’s friend walking into the apartment. The landlord allegedly claimed he was looking after the cat while she was gone, but that was actually the reason the friend was there, so she knew something wasn’t right.

“I did not give him permission to go into my apartment, let alone go into my room and smell my bed and pillow and see how…good I smell?” Macleod tells viewers.

When confronted with the videos later, Macleod says her landlord claimed he was looking for her cat.

“Still not sure how he didn’t see my cameras right there,” she says.

Viewers were horrified by the invasion of privacy, though several expressed having similar experiences with their own landlords in the past.

“My old landlord used to do that so I had to move,” one said.

“I changed my locks, my landlord entered with his key and once I was bathed, I left and he was there,” another recalled. “I have 3 kids.”

Many expressed concern for Macleod’s safety and suggested she report him to the police and find a new place to live.

“I did contact police and I will be pressing charges!” she wrote on one video.

She also added that she discovered he’d been in her apartment multiple times while she was gone, and she plans to share the rest of the videos once she’s finished going through official police channels.