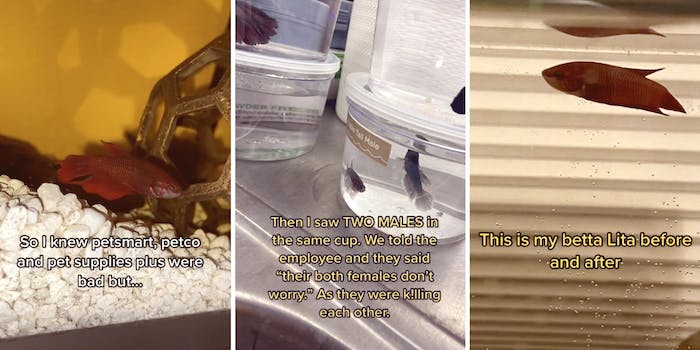 TikToker calls out Petco for alleged mistreatment of betta fish, putting 2 males together in viral TikTok

'They were killing each other.'

In a viral TikTok posted on Jan. 7, TikToker Madelyn Reisch (@theirworthmore) said that a pet supply store put two male betta fish in a plastic cup together—male betta fish “should never be kept together,” as they will fight and kill each other, according to Betta Fish Facts.

“We told the employee, and they said ‘[They’re] both females don’t worry,” Reisch wrote in the video’s overlay text. “As they were [killing] each other.” Her video received over 370,000 likes and was viewed almost 3 million times.

Reisch said she then started to investigate how Petco, PetSmart, and Pet Supplies Plus cared for the animals kept in stores and emailed the companies about the issues she found in their care practices. The Daily Dot has reached out to all three stores via email.

In a follow-up TikTok, Reisch showed screenshots of the email she sent to Petco, which called the store out for alleged fin rot, using pet mills, keeping animals in aquariums that are too small, incorrectly labeling fish, not educating customers on correct aquarium materials, incorrect cage use, and inadequate online pet care guides.

“Surviving does not equal thriving,” the TikToker wrote in the email.

In addition to posting about the email she sent, she has also posted educational TikToks about proper care for fish and instructions on how to write an email to a business about its practices. Reisch also created a petition entitled “Better care and treatment of animals in pet stores,” which has almost 4,000 signatures.

In an update posted on Jan. 22, Reisch said she spoke with a PetSmart manager who said they planned to make some of the changes that she suggested.

“We’ve sent emails to corporate. It’s not 100% guaranteed that they will respond but they will read it,” Reisch said the manager told her. The manager, Reisch said, plans to “adjust the training [their] employees get,” and said they explained Reisch’s concerns to their employees.

The TikToker also said she received an email from Petco but that she hasn’t heard back from Pet Supplies Plus.

Commenters on Reisch’s original video said that they were worried about how animals in pet stores are treated and cared for as well.

“Corporate does not care,” commented @the.celestial.moth, who identified themselves as a former employee of Petco and PetSmart. “It’s up to the employees to try their best. Some [stores] have good ones some…not.”

“Even if you think you work at a ‘good’ Petsmart or Petco, the animals they buy from breeders tend to be badly bred,” @sirgore wrote.

Others said they saw changes in their local pet stores already.

The Daily Dot has reached out to Reisch via TikTok comment.