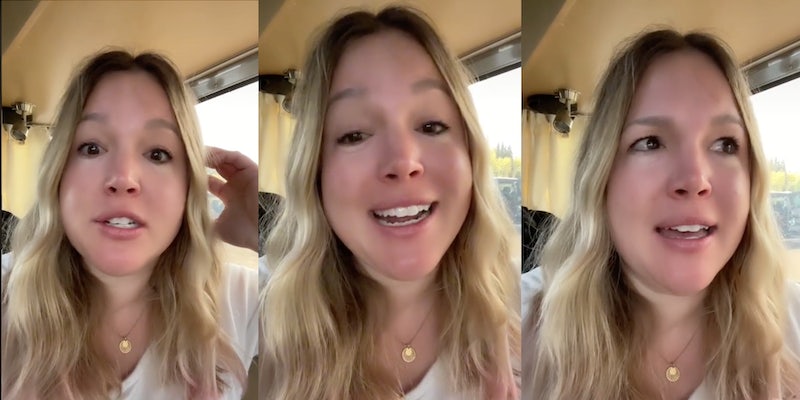 'It was just him, there was no Gabby.'

A TikTok creator’s possible sighting of Brian Laundrie may have helped lead police to the remains of Gabby Petito, which were found Sunday, Sept. 19, in Teton County, Wyoming.

Jessica Schultz, known as @jessica.over.yonder on TikTok, told the San Francisco Chronicle that she saw the Ford Transit van used by Petito and Laundrie on their cross-country road trip multiple times in August near Grand Teton National Park, reportedly giving eye-witness testimony to the Federal Bureau of Investigation (FBI).

Schultz recounts the alleged sightings on her TikTok account, which has over 30,000 followers. In one video that’s received 1.9 million views so far, Schultz tells viewers she saw Laundrie parking the white van at Spread Creek, near the park on Aug. 26, and recounts other sightings of it through Aug. 29.

“I had already reported to the FBI what I had seen, but now that there’s dashcam footage, where I saw it, I’m 100% certain that I did see him parking his van,” she says. “It was just him, there was no Gabby, but that’s only because as a van lifer I was checking out their van to see if it was a couple, or if it was a solo dude.”

“It was a solo dude, as far as I could see, unless she was in the back somewhere, but when I pulled up, he was driving still but he hadn’t yet pulled over so I was like, ‘Hey, what are you gonna do? Are you going to get over, are you going to let me pass?’ Because it’s only one car width road, and he kind of pulled over like halfway and made me drive out of the road to go around him, so I thought it was just really weird,” she continues.

In a follow-up video, Schultz says she and a group of friends were camping in Spread Creek from Aug. 22 to 29, and in that time, she and each of her friends had noticed the van parked in the area.

“I noticed it particularly because I had seen it trying to park in that spot,” she says. “The Spread Creek area is a bunch of designated camping spots, and you’re not supposed to camp outside those spots. This wasn’t a designated spot, so I figured that they’d get booted by the people that patrolled the area.”

Schultz says that while the van was parked there for several days, “there were no signs of life” and that it didn’t look like anyone was there camping out in the van. Petito’s body was found near Spread Creek on Sunday, according to Yahoo News. The Independent reports that Schultz “directed police to Petito’s body.”

The Daily Dot has reached out to Schultz via TikTok direct message.

The search for Brian Laundrie, who is a person of interest in his fiancée Petito’s death, is ongoing, with the FBI requesting anyone who may have seen him to make a report either online or by calling 1-800-CALL FBI.