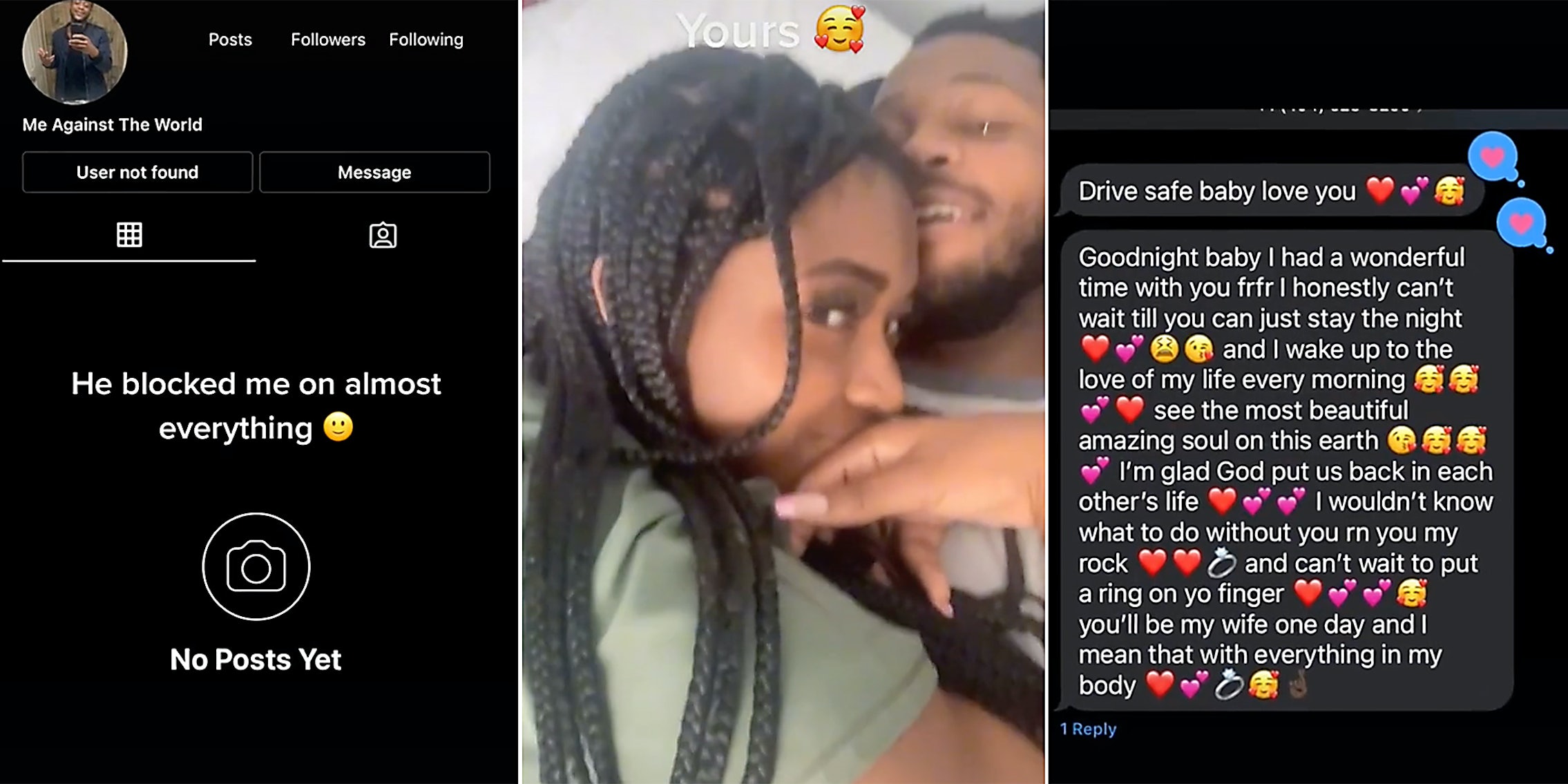 ‘He played me’: TikToker says boyfriend suddenly blocked her, ghosted, and moved away

‘No arguments, no disagreements, no warning signs.’

TikToker Britt (@brittdneil) says her now ex-boyfriend ghosted her with “no warning signs,” detailing the situation in a viral 12-part storytime saga. The original video earned 1.9 million views since Wednesday.

“The ‘LOML’ [love of my life] blocked me out of nowhere…” Britt writes in the first video.

In the original video, Britt shows screenshots of text messages between her and her ex-boyfriend, “D,” in which he sends her paragraphs of adoring messages.

“I wouldn’t know what to do without you rn you my rock,” a text from D reads. “Can’t wait to put a ring on yo finger.”

However, another screenshot shows that after a night out, D says he stayed at his friend’s home. Several texts and a few hours later, Britt realizes D blocked her on social media and shows a screenshot of his Instagram account with “no posts yet”—a feature on Instagram that indicates that the viewer’s account may have been blocked.

Britt says she had dated D in high school, and the pair reunited in December 2021 and began a relationship.

“Everything just felt so beautiful,” Britt says about the beginning of their relationship in a video. “I just felt so full of love.” She says they dated for about a month before D went ghost.

Britt says the night before D ghosted, she drove to D’s house because he had been unresponsive to her texts. When she arrived at his home, his car was not there. The next morning, Britt discovered she was blocked from contacting D.

Despite her phone number and Instagram being blocked, Britt says adds a notes app screenshot to an iCloud photo album shared with D, and the picture still went through. She says at the time, she thought someone had gone into his phone and blocked her number but was in denial that D was the culprit.

“Who blocked me on your phone? I was blocked on IG and your phone number,” the notes app screenshot reads. “Because there is just no way you would ever do that, I already know.”

However, Britt says that after she added the screenshot to the shared photo album, D unsubscribed from the album.

Britt says she returns to his home and enters the key code to enter the house, slipping a sticky note under his door. The note reads, “I’ll be honest, you are really fucked up for this one. There was nothing I did to deserve this and you know that.”

When she returns the next day, Britt enters the house again, this time opening the door to his room. In part 9 of the video series, she shows a clip that she took that day of all of D’s things removed from his room.

“At that point, I knew I was never going to see that man again,” Britt says.

Britt says a few days later, she was followed on Instagram by D’s old account. She saw in the direct messages that D had tried to video call her several times to talk about the situation. She says he then called her best friend in an effort to contact her.

Eventually, Britt and D talked via FaceTime, and D apologized for blocking her, saying that he was depressed and didn’t want to bring her down. However, Britt says she decided not to get back with D.

“The logic in me was telling me that he played me and I needed to leave him,” Britt says in an update video. She then says that D is a narcissist and tried to manipulate her, an assumption that was echoed by several comments on her storytime.

In the final installment of her TikToks, Britt commented that she doesn’t feel ill-will: “I just wish he could’ve did better and I hope he becomes it,” she says. “I deserved better than this.”