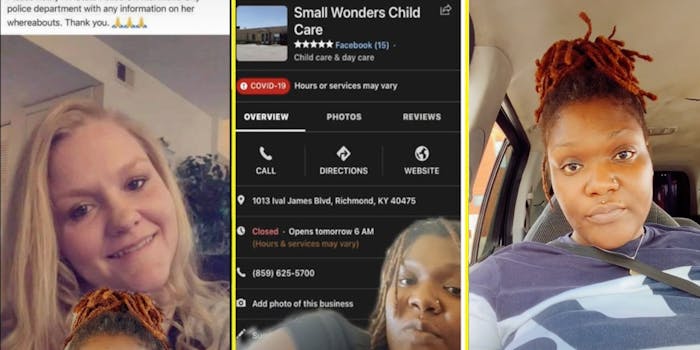 She called the police after learning the worker 'slammed him on the floor and sprained his arm.'

A TikToker alleged that a worker at a day care center in Richmond, Kentucky abused her four-year-old child and is promising legal action as she tries to harness the power of social media to track the abuser down.

The TikToker, posting under the @kiaradagee account, put up the original video on Friday, starting it by saying, “I need y’all to blow this up for me.” People have obliged, with the video approaching 700,000 views as of Monday afternoon.

She came right out with her experience, noting that “a teacher assaulted my four-year-old, slammed him on the floor and sprained his arm” at a day care center in Richmond, a city located about 25 miles southeast of Lexington.

While the TikToker didn’t identify the day care in the original video, her follow-up video identified the center as Small Wonders Child Care.

In the initial video, the TikToker shared a screenshot of the accused abuser’s photo on Facebook, with text indicating that the person in question—Brittany Taylor (aka Brittany Lee)—”has been missing for a week. She left her phone, car, and purse at home to talk a walk and hasn’t been seen since.”

Though it wasn’t clear when that message was posted, the TikToker noted that “allegedly after she found out that I had contacted the police, she ran away.”

She also said—alleging that Small Wonders didn’t contact her when the abuse happened, and she only learned of it after coming to get her four-year-old later that day—that she is pursuing legal action against Small Wonders.

Though she noted, upon learning about the incident, she reacted, “So immediately, I’m like okay Imma kill this bitch, but I’m a Black woman in Kentucky, I can’t touch no white woman.” She did, however, go to the police, and said police went to the day care center and reviewed surveillance tapes.

She also got colorful details from the abused child’s five-year-old sibling, who reported that the teacher allegedly flicked that child in the face and said, regarding the actions against the four-year-old, “He got what the fuck he deserved.”

The follow-up video contends that Taylor “has a criminal record,” elaborating, “She was charged with assault and burglary last year and this is all public information.”

The Richmond Reporter did publish an arrest record of a then-31-year-old Brittany Taylor from August 2020, for “first-degree burglary” and “fourth-degree assault (domestic violence) minor injury,” though the Daily Dot has not yet been able to confirm if this Brittany Taylor is the same one the TikToker is alleging laid hands on her child.

The Facebook page for Small Wonders is currently locked (with content not visible), and four people have gone to the business’s Yelp page to leave one-star reviews and to underscore the TikToker’s allegations. Folks have also flocked to the day care’s Google Reviews in support of the TikToker, but there are also negative reviews, one going back two years, that have detailed previous bad experiences at Small Wonders.

The Daily Dot has reached out to the TikToker and to Richmond Police for comment.

The Daily Dot also reached out to Small Wonders; an employee who answered the phone there said, “We’re not allowed to answer any questions” about the case and referred us to the police department.