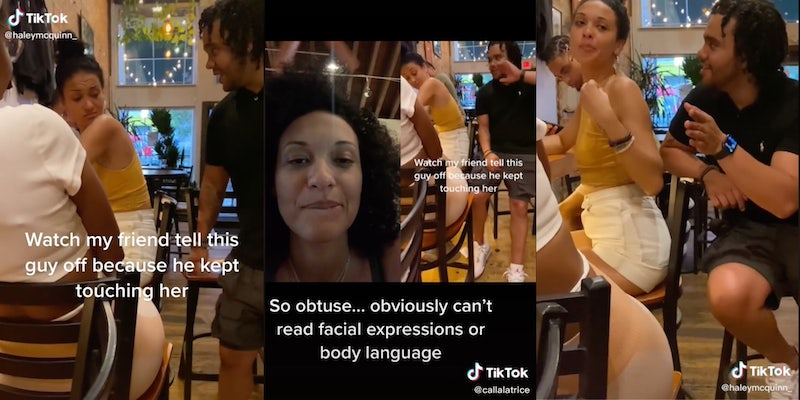 TikTokers are offering their support and respect to a woman whose friend caught her on video telling off a man who would not stop touching and bothering her.

The TikTok, posted yesterday by @haleymcquinn_, shows the user’s friend—who is tagged in the video as @callalatrice—sitting at a bar. A man is sitting directly behind her on his own stool, but keeps touching her chair and talking to her while she is facing away from him.

His arm then touches her back and she gives him a dirty look.

“Oh, shit! I touched her again; call the [unintelligible],” the man says.

He stands up, one hand still on the woman’s chair, and laughs it off, repeating that he was talking to her friend, not her. The friend interjects and says he was talking about her, though.

“You were talking to her about me and talking about my trauma because, yes, for the last fuckin’ 30 years of my life [N-word] don’t know how to keep space. They touch you inappropriately, they talk to you inappropriately, and they be in your motherfuckin’ space inappropriately, so yeah,” the woman says to the man who was touching her before the video cuts off.

“I cannot stand people that act like him!,” commented @littlest_tulukaruk88. “‘I don’t have an issue with me getting in YOUR personal space, you should relax.’”

Many agreed that his behavior was uncalled for and inappropriate, and said they could relate to the situation the woman was going through.

“Triggered. When they gaslight you and try to make you feel like you’re overreacting for normally reacting to their disrespect,” wrote @vixycurlz.

“And men will STILL think he was just playing and joking. WATCH YOUR HANDS,” said @songbirdwendy.

Others acknowledged that some people will still blame the woman in the video regardless of the situation.

“I just know someone out there thinks she’s dramatic. 😑 it’s called respecting personal space and education. How were some of y’all raised,” commented @dherl7.

The woman in the video posted a side-by-side TikTok in response to the original video.

She doesn’t speak in it, but the overlay reads: “So obtuse… obviously can’t read facial expressions or body language.”

The comment section was similar to that of the original video.

“Girl cheers to you cause I would have pepper sprayed or raised hell. He got issues fr,” said @cillageee.

The Daily Dot reached out to the woman for comment.