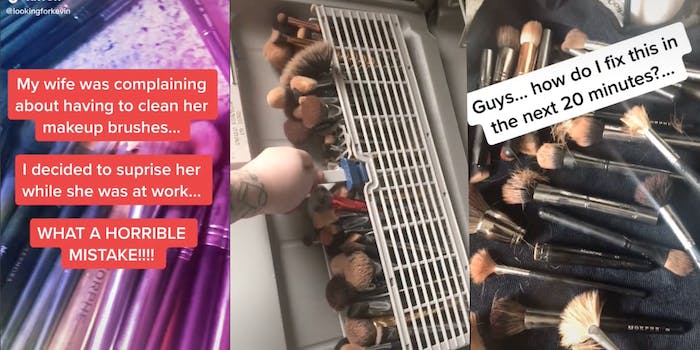 'Do we need a wellness check on this man?'

After a TikTok prankster destroyed his wife’s makeup brushes by attempting to clean them in a dishwasher, commenters say they “gasped.” One person wrote, “oh you woke up and chose death.”

Kevin Kane, whose TikTok username is @lookingforkevin, has over 58,000 followers on the app and is popular for his prank videos. In a TikTok posted Thursday, Kane wrote that his wife “was complaining about having to clean her makeup brushes” and he “decided to surprise her while she was at work.” He continued, “WHAT A HORRIBLE MISTAKE!!!!”

In the video, Kane places dozens of brushes in the utensil compartment of his dishwasher and turns on the machine. At the end, some of the brushes are noticeably broken, and makeup brush pieces cover the inside of the dishwasher. He captioned the video, “Ummmmmm TikTok I need your help!!! How do I fix this!!!”

TikTok users commented that the brushes are worth a lot of money. One person commented, “$300-600 is my guess of how much those brushes are worth.” Many recommended Kane get his wife “a $500 gift card,” and others said that $500 would not be enough.

“Y’all really think those brushes are worth only 500 dollar Sephora gift card,” one commenter wrote. “Notice how they’re all from different brands, they expensive as hell.”

Others joked that they need to get Kane a “wellness check” and wrote, “It’s been 6 hours, someone check on him.”

“Only way to fix this is to go into witness protection,” someone joked.

In his next video, which was unrelated to the prank, Kane wrote “#stillalive #married.” Kane, who did not immediately respond to the Daily Dot’s request for comment, posted the video again and wrote, “Please help this go viral so I can get a new set lol!”

A Twitter user wrote that “she can fix it with divorce.” Another wrote, “No way he thought this was a good idea.”

Update 3:28pm CT, Jan. 15: In a message to the Daily Dot, Kevin Kane said his wife was “cool” with the makeup brush prank.

“We joke around with each other all the time and actually have a really good relationship,” Kane said. “We don’t worry to much about material things they can always be replaced.” He added that he and his wife are both makeup artists, which is why her collection of brushes is so large.

He said he was inspired to try the dishwasher method because he was “really trying to do something nice” but didn’t want to help clean each brush individually.

“[You] know I subconsciously knew what was going to happen but we also have a 2 year old and he was running around and I just wasn’t thinking clearly,” Kane said. “Halfway through the cycle I realized what I have done and it was already too late.”