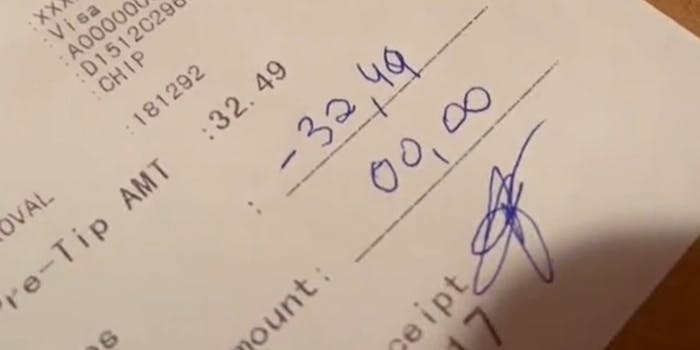 ‘I don’t think that’s how it works’: TikToker gives a negative tip due to bad service, dividing viewers

The TikToker assured it was a joke but that didn't stop viewers' outrage.

In a viral TikTok video, @gameoftony shows himself subtracting his entire meal total on the bill’s tip line, as if he isn’t going to pay for the meal at all. The video has received over 800,000 views since it was posted.

He was apparently unsatisfied with his meal because he wrote in an overlay on the TikTok, “Wrong food, waiting forever, rude waitresses, so sad.”

The video brought about a tip debate from people in the comments. Some think that it’s best to always tip, while others said that tips need to be earned.

“As a past waitress this makes me sad. I always tip even if there are issues. We are human, mistakes happen,” @criminalmindsaddict1566 said.

“To the ppl that say always tip. I worked in the industry..tips are earned. Good service equals good tips,” @ashtebulte said.

Others laughed at the video.

“I don’t think that’s how it works. You still have to pay, my guy,” @radioactivehusky said.

In case you were concerned that the TikToker effectively dined, dashed, and skipped on the tip, worry no more. A closer look at the video reveals that the TikToker was writing on the customer copy. The TikToker told the Daily Dot in an email that he was surprised many people did not get the joke.

“Half of the people understood the joke and half hates me now,” he said.