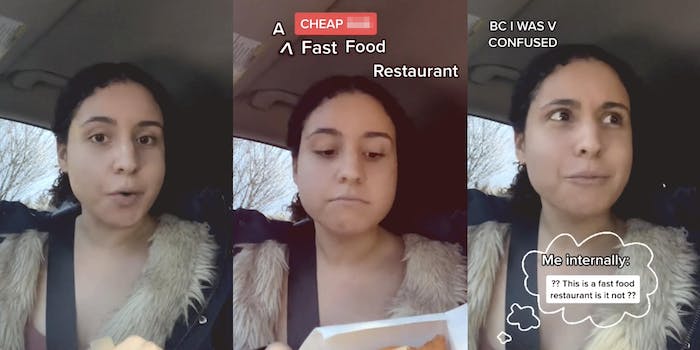 ‘I’m in the f*cking drive-thru’: TikToker says ‘tipping culture’ has gone too far in viral video

A TikToker is calling out “tipping culture” and explaining how they felt uncomfortable while picking up her order in a fast-food drive-thru.

User Justice Russell (@realistic.recovery), who often shares content about eating disorder recovery, posted a video from her car after picking up chicken tenders and fries from a local burger place.

“I’m sorry to say this, but tipping culture has gotten out of control,” she said. “I get up to the pay window, and she’s like, ‘How much do you want to tip?’”

“I was like, ‘Oh no, not today,’ and then I felt really uncomfortable. But like, homegirl, what am I going to tip you for? I’m in the fucking drive-thru,” she said in the video.

Tipping is a hotly debated issue in the U.S., where front-of-house restaurant workers are legally allowed to be paid below minimum wage, forcing them to rely on customer tips.

Russell said she always tips 20% “even if the service is bad” for services at sit-down restaurants and nail salons. But tipping at a drive-thru crossed a line for her.

“I drove myself… to avoid tipping a delivery driver,” she said.

While TikTok viewers are usually prepared to blast bad tippers, people agreed with her that “tipping culture” is spiraling into something uncomfortable and inconvenient, all because employers just aren’t paying people enough.

“I went to a self serve frozen yogurt place and she asked for a tip and I was like uhhhhhhh you’re just standing behind a register??” @meepmeep46 recalled.

“I have a rule, if I didn’t sit down, I won’t tip,” explained @sarahsalami4. “We tip for the service they provide us. It’s getting out of hand really.”

Another viewer claimed that someone got mad that she didn’t tip when she ordered a pizza for pick-up, and another insisted that take-out orders should never be tipped.

Russell ultimately suggested that the place she went to should “literally just charge me the extra $2 for my meal, stop making me feel uncomfortable,” but several viewers had an even better suggestion.

“How about rich people just pay their workers fairly instead of putting it on other working class people,” wrote @tylerlamanna.