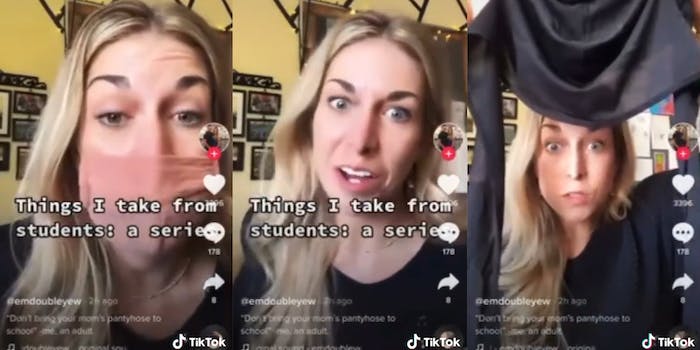 The teacher says she took it from a white student.

A viral TikTok video shows a “Karen” exposer blasting a white teacher for confiscating a durag from a student and calling it “pantyhose.” The teacher says she took the item from a white student.

User @autntkaren0 posted a video explaining that a Wyoming teacher named Mariah Webb, using a now-deleted handle @emdoubleyew, was the “racist of the day.” The overlay in Webb’s video says, “Things I take from students: a series.”

“Things that my kids bring to school that I get to ‘confinscate,'” says Webb, incorrectly pronouncing the word “confiscate.”

She’s shown with a durag and eventually puts it on her head. “Looks like pantyhose,” she says.

“Now, Mariah, the devil works hard; but we work harder,” explains @auntkaren0 while showing Webb and her husband in the background.

She then shows how she tracked down Webb’s information, including the high school in Wyoming where she teaches.

Commenters on Twitter had much to say about Webb and her inability to pronounce the word “confiscate.”

Webb made an apology video, which @auntkaren0 also reposted on her page.

She explains, “I owe every single person that saw my video yesterday an apology.” But then she says that while she’s “not justifying any actions,” she essentially should be allowed space for learning “due to the context of the situation, and the lack of education.”

She explains the incident had an interesting twist: “The black item, which I found out was a durag on TikTok, was taken away from a white student, who had it wrapped around his neck in my class.”

If she’s to be believed, this isn’t just about Webb’s insensitivity of a traditionally Black hair garment; it’s also that she took the durag away from a white kid who wanted to be down but who was never going to have 360 waves deeper than the Pacific.

Webb gets a big red mark for her lack of cultural education. But it seems she also inadvertently prevented further cultural appropriation.