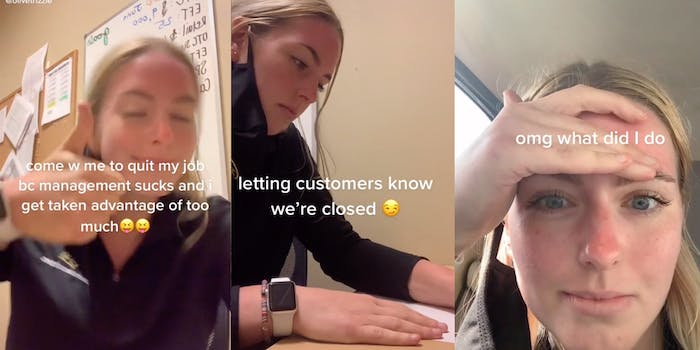 She said her manager is threatening to withhold $300 from her paycheck.

A Dallas tanning salon employee has shared her quitting experience on TikTok with a video that has gained over 104,000 likes and 730,000 views.

User @olivetrizzle shared a video of her closing up shop in the middle of her shift and walking out of her job at a Dallas location of the Palm Beach Tan chain on Friday, June 25.

“Come (with) me to quit my job because management sucks and I get taken advantage of too much,” she captioned the video.

In follow-up videos, @olivetrizzle shares screenshots which are allegedly came from her manager, stating that if she sets foot on the property the police will be called and that $300 would be withheld from her paycheck because she kept a key to the store.

However, she stated that she intended to return the key by mailing it. The manager appeared to reject her attempt to do so.

“Because I’ve offered to send this key back,” @Olivetrizzle said. “And you’re not giving me the option to, you’re just telling me you’re taking the money that I worked for. I don’t work for free. No one does. That’s illegal.”

People in the comments of her videos claiming to work for the same tanning chain have suggested that part of their employment contract states that the key must be returned within 24 hours of quitting, or they lose out on $300.

“Unfortunately the key holder policy in the planner you sign states that if you quit you have 24 hours to return the key or they can take $300 out of your last check,” user @AmyHoagland3 wrote. “I was a manager at a Houston location and they did in fact take the money out and there was nothing I could do (because) I signed that.”

As for Palm Beach Tan, some viewers have left Google reviews trolling the business in @olivetrizzle’s honor.

“Went there for a tan, I got there and the manager came out slicked with baby oil and told me there was a slip and slide in the back and I was welcome to join,” commenter Carissa Orlando wrote. “Then when i declined the staff called me an ugly rat. At least the the roaches held the door open for me on the way out.”

“The absolute worst service I have ever received,” another commenter wrote. “Unprofessional management. Waited for 30 minutes before being seen. Went to the bed just to find pee and used tampons in the corner of the room. The bed was covered in sweat when I walked in. I asked for a refund and was told no. DO NOT RECOMMEND.”

@olivetrizzle said in a video that she will take the matter to court if she sees her next check short $300. She stated that her last paycheck is paid out on Friday.

The Daily Dot has reached out to Palm Beach Tan.

Update 3:26pm CT June 27: In a statement to the Daily Dot, @olivetrizzle explained that she felt as though her workload was not equitable to those of her coworkers. She was surprised by the reception of her video

“I didn’t expect that many people to see it,” she said. “A lot of people are like, supporting me through it and like, giving me advice, and that’s really helpful. And I just feel very validated in this.”

She also said that she didn’t remember signing a contract saying that she would have to pay $300 if she didn’t return the key. However, she does remember being verbally told about a similar policy regarding lost keys.

“I genuinely do not remember signing (anything),” she said. “We had to sign a bunch of contracts for other stuff, but I don’t remember signing one for a key. And maybe that’s because like, I probably signed it, when I first started working. And then I got my key later. I feel like I would have remembered if it was talked about, but I was told if the key was lost and needed to be replaced, it would be like $300 out of my paycheck.”

As for the key, she said she still has it.

“I have the key, and they’re not going to get it back,” she told the Daily Dot. “But at the same time, like, they never gave me an opportunity to do so.”